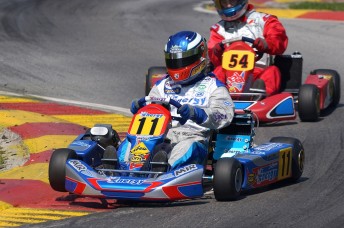 Josh Hunt in action for Energy Corse during his karting days

Energy Corse Asia will operate from locations in Kuala Lumpur and Singapore and will be closely aligned to the European factory and its race team.

Hunt went on to drive in the Toyota Atlantic Series in America after driving for Energy Corse in Australia, where he had won the Australian and FIA Oceania karting championships earlier last decade.

He drove for Energy Corse when he first went to Europe in 2002.

ECA aims to create opportunity and groom its drivers for Europe as well as making the Lotus F1 Development Program available to selected drivers in Asia.

Hunt will manage distribution and control the Energy Corse brand for the entire Asian market.

“We’ve managed to secure markets that are not even developed in Asia and I will help to develop those markets,” Hunt told Speedcafe.com

“Our base will be in KL where one of the main Asian series is located and I will also have a workshop and organisational team that runs out of Singapore.

“Karting is a fast developing sport in Singapore and pretty much all they see their is F1 and karting so there are lots of enthusiastic kids and parents who want to see motorsport grow.

“That’s the big philosophy around what I’m trying to do. I don’t want to be running simply just a go kart team because there are plenty of those.

“I want to guide and develop young drivers. In my view there is not enough mentoring from when they are young, nurturing their skills and techniques so they can become professional.”

Hunt is also eyeing the possibility of growing the business into entry level open wheel series like the Formula Masters and Formula 4.

“I want to have a presence in something like that and also a GT3 program so if drivers want to go down that path, the opportunity exists,” he said.

“As well as if they are good enough and the funding is there we can send them down the Lotus F1 path.

“We will support all the other countries with technical, chassis, parts and whatever they need with Energy Corse and build the brand in such a big market like Asia.”

Hunt will relocate from Melbourne to live in KL early in the New Year.

He brings experience to the project after competing at the highest level of world karting in Italy as well as a testing and competing in a myriad of categories in the US and Australia.