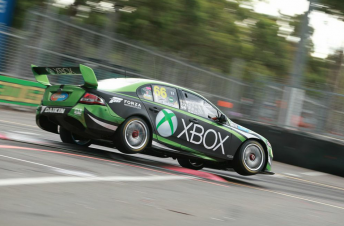 Following his difficult V8 Supercars return in Sydney after spending nine years in NASCAR, parallels have been drawn between Ambrose and Montoya.

The Colombian had a slow start to his IndyCar reincarnation with Team Penske after a 14-year absence when he spent time in Formula 1 and NASCAR.

As he did for Montoya, Cindric is keeping a lid on his expectations of Ambrose for 2015.

DJR Team Penske is looking at a three-year plan to become podium visitors and championship contenders.

While Montoya broke through this year by winning at Pocono on his way to fourth in the series standings, Cindric believes Ambrose may have to be patient before scoring DJR Team Penske’s first victory.

“With no disrespect as frustrated as Marcos was (in Sydney) I said to him, ‘remember you are not driving for Triple Eight right now, you have to take it a day at a time’,” Cindric told Speedcafe.com

“I said, ‘just ask Montoya what it’s like’. It takes you with your hat in your hand to come in and try and figure it out.”

Ambrose had issues with the braking and general set-up of his Xbox-backed FG Falcon wildcard entry in Sydney. He made progress in the longer 250km Sunday race, eventually classified 16th in the rained out season-ending race.

“Most of it for the drivers is the advancement in the braking techniques and the braking in these cars,” Cindric said.

“From the time Montoya was in IndyCar to the time he is in IndyCar now, I saw exactly the same thing (with Ambrose in Sydney).

“That technique; he is 18m behind (team-mate Scott) Pye, 10m behind, 15m behind all the way around the racetrack in the braking zones. It’s just lap time.

“I watched Montoya go through this whole process (when he returned to IndyCar for the first time since 2000 last year, joining Team Penske).

“I kind of had my expectations in check.”

Cindric had correctly forecast the performance path of Montoya earlier in the Indycar season.

“When you look at the way Montoya handled it, he was ecstatic when he finally finished fifth earlier in the year and when he was qualifying 15th he was happy that he wasn’t 20th any more,” Cindric said.

“And I think we will see the same thing here with Marcos.

“You always hope for more but that’s where we are.”