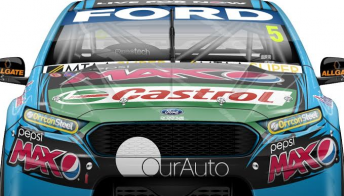 FPR will run its first FG X in the coming days

Team principal Tim Edwards says its first upgraded car will complete a multi-day aero test next week ahead of the V8 Supercars homologation hit-out in mid-January.

The pre-test will allow the team to explore various iterations of its new package before it is homologated against the benchmark Falcon FG and latest Nissan Altima L33 and Holden Commodore VF.

Nissan Motorsport has already undertaken its own pre-testing, which takes place under the supervision of V8 Supercars.

“The final parts of the bodywork are coming together now,” Edwards told Speedcafe.com at the Sydney NRMA 500.

“The plan is to run it for a couple of days next week, either at the (Ford) proving ground or at Avalon (Airport).

“We’ve got quite a few options to work through and understand what each of them do.”

Edwards has confirmed that his team is only slated to have two FG Xs running at February’s Sydney SuperTest and the following month’s season opening Clipsal 500 Adelaide.

The team is expected to field four cars next year, with the arrival of Super Black Racing’s entry coinciding with Charlie Schwerkolt’s switch to Walkinshaw Racing.

The Mark Winterbottom and Chaz Mostert driven Pepsi Falcons will be FG Xs from the outset, while the third and fourth cars are scheduled to be upgraded for the subsequent Albert Park and Symmons Plains events respectively.

“It’s not just about making a set of parts, you’ve got to make spares as well,” explained Edwards.

“At a guess, it won’t be until about April that we’re all changed over. It’s all just driven by our manufacturing ability.

“There are some things we can charge on and make, like the front guards, rear bumper, all of that sort of stuff,” he added, noting that the doors, roof skin and rear quarter panels are the only major carry-over items from the FG.

“Nothing is going to change on that (during the homologation process), but the two things we can’t mass produce at the moment are the front bar and the rear wing.

“We’ve got different (rear wing) chord length specifications, so until we do the testing we don’t know what we’ll be running, which will then effect the end-plates and mountings as well.”

While the FG X aero package has been designed by FPR, fellow Ford runners DJR Team Penske will manufacturer their own panels for Marcos Ambrose’s entry.

“The patterns for them to make their own moulds are currently being shipped up north (to Queensland),” added Edwards.

Although DJRTP will also have to wait until the specification is locked in before producing some parts, the #17 Falcon is expected to roll-out in FG X form from the pre-season test.

Aside from the bodywork update, the new Falcon homologation will feature a number of other redesigned items aimed to cut costs and increase competitiveness.

The team will no longer use the Falcon’s standard radiator support panel and headlights, moving to lighter bespoke items in line with the majority of the current field.