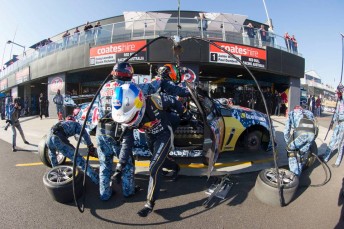 The leading V8 Supercars teams have moved early to secure co-drivers ahead of the 2015 Pirtek Enduro Cup.

While over 10 months remain until the Sandown 500, the majority of the most fancied seats have already been locked in.

Chief among them is that alongside newly crowned six-time champion Jamie Whincup at Red Bull Racing Australia.

Paul Dumbrell side-stepped questions on his plans at the weekend’s Sydney NRMA 500, but is understood to have signed on for a fourth consecutive year.

The pairing secured this season’s Enduro Cup trophy by winning the second heat at the Castrol Edge Gold Coast 600, adding to previous successes at Sandown (2013 and 2014) and Bathurst (2012).

Dumbrell’s return will give Red Bull a stable endurance line-up, with Steven Richards having joined the team this season on a two-year deal.

Volvo Polestar Racing’s key pairing is too set to remain, with Alexandre Premat set to return alongside Scott McLaughlin.

The Frenchman’s place had been in doubt while he chased a drive in the World Endurance Championship, which features a date clash with Bathurst.

Another star of this year’s Enduro Cup, Tekno Autosports, is also scheduled to return with an unchanged line-up as team owner Jonathon Webb settles into his position as co-driver.

Elsewhere, there will be change at Ford Performance Racing, with Bathurst winning co-driver Paul Morris stepping aside.

Cameron Waters and Steve Owen are set to co-drive the two Pepsi FPR entries next year, although the exact pairings alongside Mark Winterbottom and Chaz Mostert are yet to be decided.

The 20-year-old Waters, who drove Charlie Schwerkolt’s FPR entry in this year’s Enduro Cup, will also return to the Dunlop Series with the factory operation.

Plans for the opposing factory squad, the Holden Racing Team, are meanwhile a work in progress following confirmation of Greg Murphy’s switch to commentary duties.

Its position will be heavily impacted by ongoing discussions over the future of Nick Percat, who will return to its endurance line-up if a full-time seat cannot be found.

The other powerhouse squad in the co-driver market, DJR Team Penske, is also yet to settle on its plans.

Penske president Tim Cindric, who attended the weekend’s Sydney 500, told Speedcafe.com that a decision will likely be made before year’s end.

“We have (had discussions) and it seems like the obvious ones already have a place,” he said of the co-driver picture.

“I think that’s something that we have to decide in the next 30 days or so, how we’re going to approach that.”

Cindric downplayed the chances of flying in one of its IndyCar stars for the Enduro Cup following his own visit to Bathurst in October.

“Our responsibility is to find the best and most capable to go and win Bathurst and if that turns out to be one of our existing guys, fine,” he said.

“If we determine that there is someone else better available then we will go with them, not just because they are a Penske driver.

“If you ask Will (Power, 2014 IndyCar champion for Team Penske) or any of those guys, they’d love to come out and do it, but after being there, I have a whole different respect for what it takes to participate there versus what it takes to win there.

“Before I went there I thought it’d be pretty likely that we could take one of those guys and have a shot at winning.

“Now I think we need to take our time a bit more and understand what our other choices might be.

“The easy route would be to have one of our guys do it, but that might not be the most prepared route.”

Key local co-drivers remaining in the enduro market include Jack Perkins and Russell Ingall, who are fresh from stints as full-time drivers.

Charlie Schwerkolt has already declared his desire to retain an enduro seat for Perkins, who proved one of the stars of the 2013 campaign alongside McLaughlin before a difficult full-time tilt this year.

DJR’s Scott Pye looms as an endurance-only prospect amid DJR Team Penske’s decision to run a single car, while Steven Johnson is also thought to be a contender for the sought-after seat alongside Ambrose.