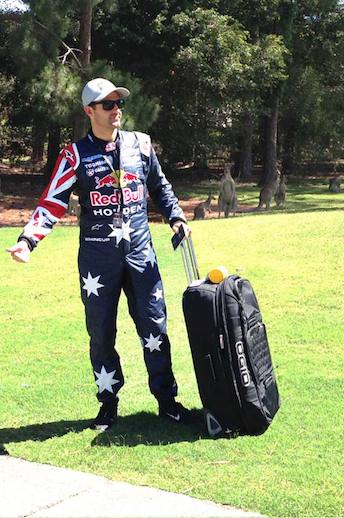 Jamie Whincup, posing in his ROC race suit before the cancelled 2013 event

Jamie Whincup will face-off against Romain Grosjean and David Coulthard in the group stage of this weekend’s Race of Champions in Barbados.

Organisers have released the full draw for the event which marks Whincup’s second ROC appearance, having debuted in Thailand two years ago.

The ROC pits stars from the sport’s different disciplines against each other, running on parallel-lane stadium circuits in a variety of machinery.

The knock-out formula sees the 16 drivers split into four groups, with the top two from each eventually progressing to the semi-finals.

Whincup was knocked out of the competition in the group stage last time around, where his rivals had included Coulthard and World Rally star Sebastien Ogier.

Retired motorcycling legend Mick Doohan is again joining Whincup for the Nations Cup, held under a similar format on the night preceding the ROC.

The Australian duo made the semi finals in Thailand before losing to German superstars Sebastian Vettel and Michael Schumacher.

A ROC Caribbean, pitting host nation Barbados against teams from Jamaica, Guyana and Trinidad & Tobago, will also be held as part of the event.

See below for the full 2014 Race of Champions draw.

Fastest ROC Caribbean driver from the other teams