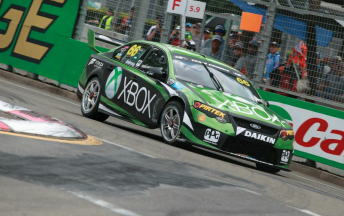 Marcos Ambrose has urged DJR Team Penske to be patient with him following a challenging return to the V8 Supercars Championship in Sydney.

In his first V8 Supercars event in nine years, Ambrose recorded finishes of 20th, 21st and 16th across the three races.

The 38-year-old struggled for much of the weekend to get the best from the current generation brake package, finishing no better than 22nd in any of the four practice sessions.

Twenty-third meanwhile proved his best starting spot, with his qualifying efforts halted on Saturday thanks to a crash at the Turn 5 sweeper.

“(On Sunday) it all started to click in the Xbox Falcon, despite the weather conditions,” he said.

“I am much happier than where we started (the weekend) and I think there is a small window of light coming through now.

“I am already looking forward to getting back in the car for the two day test at Eastern Creek and staring work on this new deal.

“It was a tough weekend, no doubt about it, but we kept the car straight and finished all the laps available in all the races, which is what I wanted to do.

“The weather was a factor too, but it did allow me to experience a lot of different things and I do feel a bit more rounded after not driving these cars for nine years.

“I’ve got a long way to go and I just hope the team is patient with me and we can build this thing into a winning combination.”

Ambrose jetted back to the United States on Monday, where he will reunite with his family to pack up their Charlotte, North Carolina, home.

The former two-time champion will base himself out of his native Tasmania next year, while also retaining his residence on the Gold Coast.