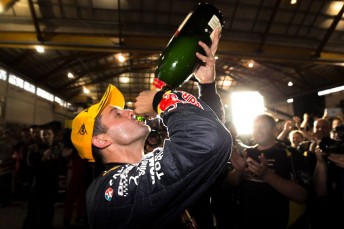 Newly crowned six-time V8 Supercars champion Jamie Whincup has hit back at criticism of his dominance, saying it’s up to rivals to improve their performances.

Whincup, who put the championship mathematically out of reach of competitors at Phillip Island last month, was officially awarded his sixth title on Sunday at Sydney Olympic Park.

The unprecedented run of success has undoubtedly contributed to mixed opinion of Whincup among V8 Supercars fans.

Although now officially recognised as the category’s most successful ever, Whincup finished just seventh on a recent Speedcafe.com Pirtek Poll asking fans to name their favourite driver.

“Maybe I’m too selfish,” said Whincup in response to the fan reaction.

“At the end of the day I’m just trying to make the sport a better place, go out there and race hard and try and raise the level of the sport.

“I don’t think anyone should be brought backwards or lower the top end to even it up against the bottom end.

“As I’ve said about Marcos Ambrose coming in, hopefully he brings something new and raises the level of the sport and we’ve all got to grind it out.

“We won’t have fun doing it, because it’s more sacrifice, more late nights and more time away from the family.

“But at the end of the day we’ll look back on it and go ‘that was a good thing’. I’m all for people trying to raise the level.

“FPR did that at the start of the year. I know we all try and talk up the battle between Triple Eight and FPR, but at the end of the day I’ve got so much respect for those guys.

“They actually stepped up to a new level and we had to chase them down. They’re the things that I’m going to look back on and go ‘that was a grind, that’s what motorsport is all about’.

“That’s what’s giving me so much satisfaction right now. Knowing that they did perform at a very good level and that we were able to go one better.”

In the wake of his sixth title, the typically self-effacing Whincup stressed the importance of his Triple Eight team in each of his successes.

“The truth is the trophy is not big enough to put everyone’s name on it, it’s got to have only one name on it and that name is going to be my name,” said Whincup.

“There’s a big group of people who think I’m much better than I actually am, and that’s okay, I’m cool with that, I will roll with that for as long as I can.

“But at the end of the day, I’m part of a huge group of people that are as dedicated as I am.

“We’ve been able to achieve some unbelievable things and they make me look good, week in, week out. I owe so much to them.

“For me, someone’s got to have number six against their name and it’s a nice feeling and it obviously reflects on what a good job we’ve done.

“But, let’s be really clear that there’s a lot of people involved in that and they should be on top of the world right now, I’m sure they are.”

Whincup will travel to Barbados later this week for his return to the Race of Champions, pitting his skills against a selection of the world’s best from other motorsport disciplines.