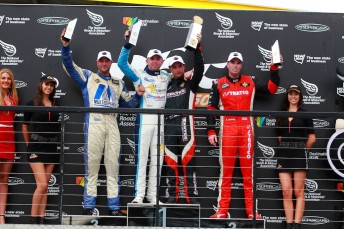 Elliot Barbour, starting Race 2 from the front row of the partial reverse-grid, seized the lead as the field approached the Turn 2/3/4 chicane for the first time as Walton, needing only to finish to clinch the title, was adjudged to have jumped the start from P3.

The Rentco driver was unperturbed, passing second-placed Michael Almond just prior to the appearance of the Safety Car on Lap 2, then Barbour on Lap 5.

Walton put his head down in an attempt to overcome the five-second time penalty, doing enough to take sixth with the time added at the finish, the 2011 rookie of the year thus crowned champion with a race to spare.

“It means a heap,” said Walton.

“It means a heap for the whole team. They’ve just put a massive effort in all year – the car’s been perfect from the first round until now – so I just can’t thank them enough.

Barbour inherited the win from Almond and Andrew Fisher.

Ryal Harris started the third from pole by virtue of a win in Race 1 and ninth in Race 2, and while Barbour again lead early having pushed ‘The

Rhys McNally soon relegated Barbour to third, and while the Bathurst round winner made time on Harris over the second half of the race, he was not able to catch the series’ form driver.

Walton made his way from 10th on the grid to finish the final race of the year in seventh.

David Sieders was twelfth and eleventh in the day’s two races as he finished runner-up in the series yet again.

Ryan Simpson swept the V8 Touring Cars’ non-championship round, thrashing his rivals again in the final race of the weekend. Drew Russell was again second, with Matt Chahda third.