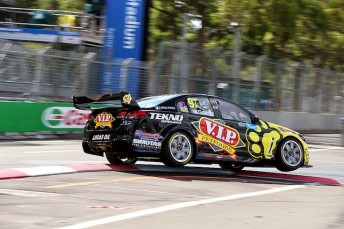 Shane van Gisbergen will be the last runner in the Top 10 Shootout after proving the fastest man in Race 38 qualifying at Sydney Olympic Park.

The Tekno Autosports Holden driver proved the class of the field during the 20 minutes, leaping to the top of the order with a 1:27.91s lap just past the halfway mark.

The time withstood all of the green tyre efforts in the final minutes, including his own.

“I didn’t go any better on the new tyres, I was on old ones at that stage,” he smiled afterward.

“It was pretty awesome, the car is really good.

“(In the Shootout I’ll just) try and be consistent, put a mistake free lap together and stay on the front-row.”

The remainder of the Shootout field was decided in the final seconds, with Garth Tander slotting into second place, 0.3s adrift of Van Gisbergen, after the chequered flag.

Jamie Whincup was third ahead of David Reynolds, Mark Winterbottom and Scott Pye, who will compete in a Top 10 run-off for the first time ahead of his last appearance with Dick Johnson Racing.

Brad Jones Racing pair Fabian Coulthard and Jason Bright both narrowly missed the cut in 11th and 12th respectively, while Craig Lowndes will also watch from the sidelines after managing just 18th.

Robert Dahlgren enjoyed one of his best efforts of the year in 15th, despite nosing his Volvo into the Turn 9 tyre barrier early in the session.

Race 36 pole sitter Will Davison endured a wild spin at the exit of the final corner on his first run on the way to 17th.

Marcos Ambrose will again start outside the top 20 in 23rd, while the Nissans of Michael Caruso and Todd Kelly both suffered brake problems at the tail of the order.

The Top 10 Shootout will get underway at 1330 local time.