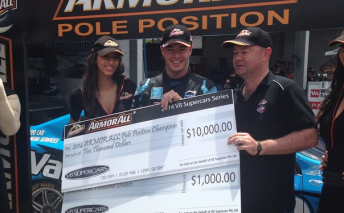 McLaughlin receives the cheques from Armor All boss Paul Blair

Scott McLaughlin has tied Jamie Whincup’s tally of 10 poles for the season in a thrilling Top 10 Shootout at Sydney Olympic Park.

Both drivers will be awarded $10,000 from Armor All under the tie following a pledge this morning from boss Paul Blair.

McLaughlin was the fourth man out in the single-lap run-off, displacing James Courtney from the top of the order with a 1:28.31s.

The youngster managed to undercut his own qualifying time despite a brief sprinkle of rain falling at the start of his run.

Although the rain stayed away from the remainder, McLaughlin was able to hold on, with each of the following runners falling short.

“It’s been a fantastic year and to top it off with this is fantastic, I’m stoked,” beamed the 21-year-old post-session.

Jamie Whincup and David Reynolds both had their laps scrubbed after triggering the kerb sensor at Turn 3.

The 250km season finale is scheduled for 1540 local time.