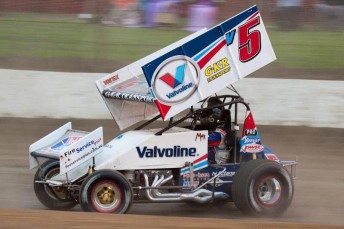 Just a day after the conclusion of the V8 Supercars Championship, Scott McLaughlin and Shane van Gisbergen will take to Sydney Speedway in two of the country’s leading sprint cars.

The test sessions have been organised through sponsors of their respective V8 Supercars teams, Garry Rogers Motorsport and Tekno Autosports.

“I didn’t even know about it until a couple of days ago,” McLaughlin told Speedcafe.com.

“It’s going to be an absolute beast to drive. I’ve never driven on dirt before so I’m just looking forward to seeing what it’s like.”

Although they will take to the track separately, Van Gisbergen admits that there will be a competitive spirit between the pair, who have rubbed each other the wrong way several times during this year’s V8 Supercars Championship.

“It’ll be the oil companies versing each other, so I’m sure we’ll have the stopwatch out,” Van Gisbergen told Speedcafe.com.

“I’ve driven a sprintcar before back in New Zealand, but it was an old car powered by one of my dad’s old racing motors.

“This one will have an extra 150bhp, so I’m pretty excited to see what a top level one is like.

“With the one I drove, I didn’t even get full throttle in it, they’re that fast. They’re pretty scary things and you’ve got to respect them.”

Although also holding fond memories of watching his father, Robert, race sprint cars, Van Gisbergen says he has no desire to make a competitive return to the dirt tracks.

“I enjoy watching it but the last time I drove the TQs I didn’t really like the racing side of it,” he said. “It’s just not what I do now.”

The ever-enthusiastic McLaughlin meanwhile says that tackling sprint car races may be a part of his future.

“I’ve got commitments obviously through the year but in the off-season it’s fair game. We’ll see how we go on Monday first and go from there.”