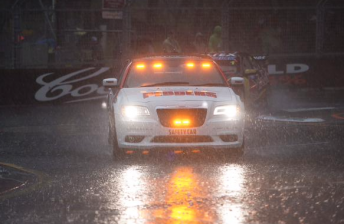 Jamie Whincup made it successive Sydney wins after heavy rain brought an early end to Race 37.

The Red Bull driver had been leading the race when the red flags were called on the 19th of 37 laps due to the conditions.

After a 20 minute stoppage, the cars returned to the track under Safety Car before the race reached its time cut-off with just 23 laps in the books.

The duration was sufficient to award full championship points.

Starting fourth, Whincup had surged to the lead amid a frantic four-wide dash to the first corner.

Minor contact with polesitter Bright on his right-side and McLaughlin to his left failed to stop Whincup’s move to the lead.

Bright emerged from the squeeze in second ahead of McLaughlin and Shane van Gisbergen, who soon pounced on the Volvo to take third.

Whincup ran away in the early stages as all drivers stayed out waiting for the rain to hit.

Stops for wet tyres began during early sprinkles on lap 12.

Whincup timed his stop to perfection, coming in three laps later, just as the downpour began.

David Wall was left as the only man on slicks and soon found himself in the Turn 2 wall, bringing out the Safety Car and, as it turned out, the end of green flag racing for good.

Marcos Ambrose had earlier found trouble at the first corner; tagged into a spin by Craig Lowndes before suffering further contact with Perkins.

The Xbox Ford continued with superficial damage and eventually wound up 21st.