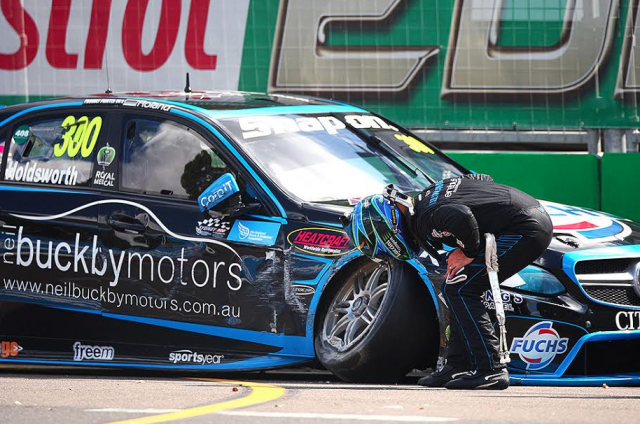 Holdsworth inspects the damage after his crash

Shane van Gisbergen made the best of a late scramble to finish almost half a second clear of the field in final practice at the NRMA Sydney 500.

The first red flag of the weekend, brought out due to a crash for Lee Holdsworth, saw the session stopped with four minutes remaining.

Van Gisbergen had been atop the order at the time of the incident, before being temporarily displaced by Jamie Whincup, Scott McLaughlin and Scott Pye in quick succession after the restart.

The Tekno Autosports Holden was however one of several cars to get two laps in on his green tyres, with the Kiwi’s second effort of 1:27.63s a full 0.42s clear of the field.

Van Gisbergen won last year’s Sunday race in Sydney and has strong form across the street circuits this year, but was typically downplaying his pace ahead of qualifying.

“I don’t think everyone got the best run with the red flag,” he said.

“We crossed the line with a second to go for that last lap. We’ll see what happens when everyone gets a good go at it in qualifying.”

Erebus Motorsport meanwhile has a heavily damaged Mercedes to repair before qualifying.

Holdsworth made heavy right-front contact with the concrete at Turn 5 after suffering a mechanical failure while on a warm-up lap.

Marcos Ambrose’s challenging V8 Supercars return meanwhile continued, with the Xbox Ford ending the session at the bottom of the order.

The two-time champion’s best lap proved 0.2s than he had managed on Friday, but was still 1.7s away from Van Gisbergen’s hot pace.

The first of two back-to-back qualifying sessions for Races 36 and 37 will get underway at 1115 local time.