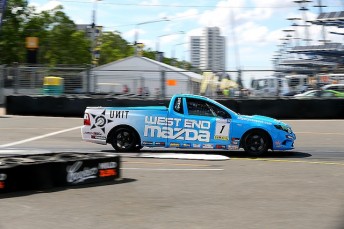 The Australian V8 Utes Series – fuelled by Hog’s Breath Café will go down to the final day of the season after series leader Kris Walton and his title protagonist David Sieders both came to grief in the opening race at Sydney Olympic Park.

Walton started the nine-lap encounter in the box seat having stretched his points lead to 63 by beating Sieders by a position in the morning’s qualifying session.

It left him needing another seven points to secure the title.

However, the Rentco driver was one of three big names to stall as the lights went out – Jesse Dixon and George Miedecke the others – dropping to 15th as Sieders slotted in behind pole-sitter Ryal Harris.

The recently crowned New Zealand V8 Utes Series champion was nearly out of the race altogether on lap five when he was tagged by Gerard McLeod, who had cannoned off the wall due to contact with Walton’s Peters Motorsport stablemate Mason Barbera.

Worse was to befall now third placed Sieders later that lap when he was pushed into the tyre wall by another of Walton’s teammates, Ryan Hansford, at the train station, relegating the Sydneysider to 13th.

While Walton continued to recover to sixth place, Sieders fell further to 15th – and that would have been game over.

However, Walton came unstuck in attempting to pass Nathan Pretty for fifth on the final lap.
The Brisbane man got up the inside of Pretty at the Turn 11 right-hander, but hadn’t cleared the Commodore by the Turn 12 left-hander and was spun out.

Walton ultimately made the chequered flag in eighth position with Sieders still 15th, meaning that the former only needs two points from the final two races to claim the series.

Meanwhile Harris continued his recent rich vein of form with a lights-to-flag win, from Rhys McNally and Hansford.

Results are provisional with officials set to investigate the Hansford/Sieders incident.

Drew Russell was easily next-best, but could not lay a glove on the local Parramatta boy and his ex-Triple Eight BF Falcon, who won the nine-lap races by 11 and 15 seconds respectively.