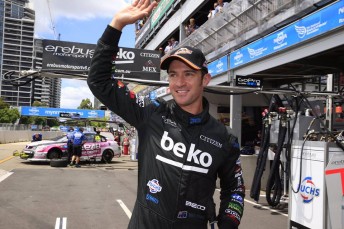 Will Davison celebrates pole for Race 36

Will Davison and Jason Bright have shared the Armor All Pole Awards in a dramatic pair of qualifying sessions on the streets of Sydney Olympic Park.

Ambrose broke the right-front of his Falcon after tagging the outside wall, while Lowndes slammed the same barrier seconds later, causing major damage to his Holden.

Despite the severity of the latter’s hit, both cars are expected to return for this afternoon’s pair of 125km races.

“The car was hooked up, we had a good first sector and I just turned in, clipped the inside kerb and it fired me across.”

Ambrose’s crash was meanwhile attributed to a misjudged downshift, which unsettled the back of the Xbox Ford, sending it into the wall.

Davison had set his best time just seconds prior to the red flag stoppage, which came with a minute remaining.

With no time for any further flying laps, officials elected not to restart the session, handing Erebus its first ever pole.

“In terms of a stat I’m just rapt for the team,” said Davison afterwards. “It’s really special to be able to deliver that for them.”

Jamie Whincup will start second in Race 36 ahead of David Reynolds, Tim Slade and David Wall.

The result was a solid boost for Erebus after a failure in morning practice saw Lee Holdsworth hit the Turn 5 concrete, ensuring he missed both qualifying sessions.

Bright recorded a 1:27.79s best with just seconds remaining; a time that Van Gisbergen subsequently fell short of by 0.08s.

“It’s been a challenging weekend so far. It’s a wild joint and we didn’t feel we’d be reaching our potential that we had last year,” said Bright.

“The car has been strong but I’ve been getting too much air off some of the kerbs. I drove it pretty straight then and just punched out a pretty good number.”