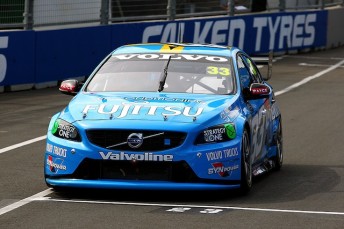 Volvo’s young tyro Scott McLaughlin and Triple Eight star Jamie Whincup remain in a tense battle in the race for the Armor All pole position honours at the Sydney NRMA 500 this weekend.

Whincup leads the head-to-head battle after 35 races this season with 10 poles, one ahead of McLaughlin’s tally of nine.

The showdown is set to reach its conclusion with separate 10 minute qualifying runs for the 125km Race 35 and 36.

A 20-minute qualifying run for the 74-lap 250km final race on Sunday will feature a top 10 shootout to determine the final pole winner of the year.

McLaughlin’s already highly decorated career with Dunlop Series and NZ SuperTourer crowns has taken off this season with four championship victories in the main game.

He is tied with fellow Kiwi Shane van Gisbergen for second on the most number of wins in the season behind Whincup’s 12.

“It would be pretty cool to knock Jamie off there and I’ll be doing all I can to do that,” McLaughlin told Speedcafe.com

“He’s an extremely good driver and I’m proud and privileged to be honest to be going up against him this far into the season.

“I’ll just be driving the thing as fast as I can. If it’s not pole then hopefully we will be there or thereabouts.”

McLaughlin is also in an intense battle to cement fifth in the championship standings.

“We want to be top five in the championship. The best thing we did at Phillip Island was not worry about the championship by just going out there and doing our thing,” McLaughlin said.

“This year we’ve been really good in qualifying. The car has been great and I’ve really got to know the green tyre a lot better.”