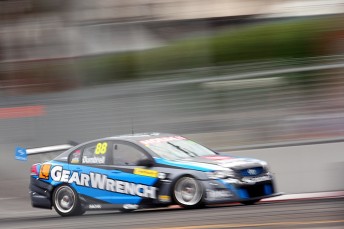 Paul Dumbrell has equalled two long-standing V8 Supercars Development Series records as he romped to another victory in Race 1 at the season-ending Sydney NRMA 500.

The GearWrench-backed Dumbrell led by as much as 4.9s in the latter stages before cruising to the line to put an exclamation mark on the title which he wrapped up in the penultimate round at Bathurst.

That marked his fourth consecutive race win, equalling Jonathon Webb’s series benchmark set in 2009, and 21st in total, matching the mark which Dean Canto set in 2008.

Cameron Waters drove a lonely race to second, making great strides in his quest to hunt down Ash Walsh for second in the series, while Aaren Russell held out Chris Pither for third.

Dumbrell, who scored pole by over four tenths of a second, beat Waters off the line, while Walsh bogged down and plummeted from third on the grid to 15th by the end of the first of 23 laps.

The driver bolted to a 2.1s lead after just three laps, but came back to the field on Lap 7 when the safety car was called in order for a stricken Kurt Kostecki to be retrieved from the main straight.

Walsh, who had recovered to tenth before the safety car, again tumbled down the order to 20th as a result of a drive-through penalty for an overzealous move which saw Ant Pedersen escorted into the wall.

Andre Heimgartner was meanwhile applying pressure to fourth-placed Pither at the halfway mark, but couldn’t find a way past his compatriot.

Instead, the Ice Break Racing driver set about hunting down Russell, but the Novocastrian held his nerve to beat Pither to the line by just under three tenths of a second.

The latter had an entertaining duel with Matt Stone Racing tyro Todd Hazelwood over several laps before the 19 year old ran wide and scraped a tyre wall on Lap 21, eventually limping to the line a lap down.

Walsh salvaged 12th to hold onto a skinny 12-point buffer to Waters in the race for second in the series.

Qualifying for the final race of the season will be held from 0845 AEDT tomorrow, ahead of the final 23-lapper at 1230.

See below for full Race 1 results