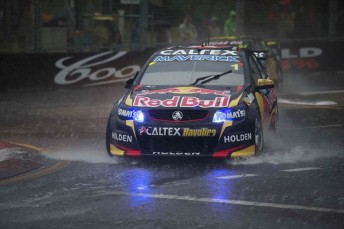 Leading V8 Supercars drivers have expressed relief at the decision not to turn the field loose for a green flag finish during Race 37 at a rain soaked Sydney Olympic Park.

A heavy downpour had seen the red flags called to suspend the race while under Safety Car on the 19th of 37 laps.

After 20 minutes of sitting stationary in pitlane, drivers were surprised by the call to return their cars to the circuit under Safety Car seven minutes prior to the race’s time cut-off.

Amid confusion over whether full points could be awarded, the field was sent back out onto the circuit, leaving drivers nervous over the prospect to return to racing.

“We weren’t sure what was going to happen, we were thinking they were going to try and do a one lap dash at the end,” said race winner Jamie Whincup.

“That would have just been carnage. There are not enough dollars up and down pitlane to be tearing cars up.

“Race control did the right thing. There were big rivers across the track.”

“They stopped it (suspended the race with red flags) at the right time and even at the end there when the rain had eased, there were too many rivers across the track,” he said.

“It was pretty much impossible to go racing.” Many, including third placed finisher Scott McLaughlin, described the lack of visibility during the downpour as the worst they’d experienced.

Drivers reported struggling to see where they were going even at Safety Car speeds, relying largely on the rain light of the car in front.

“It was really hard out there, they were pretty much the worst conditions I’ve ever driven in as far as vision,” said McLaughlin.

“Basically when it rained it was just ridiculous. I had a massive pool of water come into my car at one stage… it was pretty full on.

“There was already some carnage today, we didn’t need any more.”

Although the race always looked unlikely to be returned to green, Whincup stressed that the final decision was the most important.

“We can’t criticise Race Control because at the end of the day they did the right thing,” he said of the extra Safety Car laps.

No rain is being forecast for the Sydney Olympic Park area tomorrow, where the V8 Supercars season will conclude with a 20 minute qualifying session, Top 10 Shootout and 250km race.