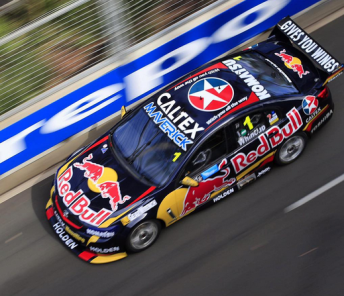 Van Gisbergen had earlier missed 15 of the 20 minutes of track running after suffering a power steering problem on his out lap.

Michael Caruso was a late improver to put his Nissan third ahead of Brad Jones Racing pair Jason Bright and Fabian Coulthard, who both spent time atop the order in the closing stages.

Further back, it was a modest return for Marcos Ambrose, who after running as high as 14th, ended the session 23rd of the 26 runners.

The Xbox Ford driver’s 1:30.33s best proved 1.4s from the pace and came on the former NASCAR driver’s penultimate lap.

The only wild moment came with a left-front lock-up during the first flying lap on his second set of tyres, which saw Ambrose cut the Turn 2/3/4 chicane.

The second of three 20 minute practice sessions for the day will get underway at 1145 local time.