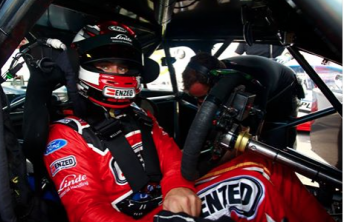 Cameron Waters set the pace in practice for the final round of Dunlop Series at Sydney Olympic Park.

Waters, Paul Dumbrell, and Ash Walsh each had turns at the top of the timesheets in the second of two 30-minute sessions before the former settled the matter in the closing stages.

The Ford Performance Racing driver saved his best until the dying seconds of the session with a committed 1:29.2780s lap.

The new champion had lowered the benchmark on consecutive laps with five minutes remaining, before catching a slide that saw him nearly make the Turn 1 tyre wall on his tenth and final tour of the circuit.

Walsh, who will attempt to hold off Waters for second position in the series this weekend, had been the first man to dip under the 90-second mark on his eighth lap, but grazed the tyre wall at the Turn 2/3/4 chicane while attempting to respond in the dying stages.

Erebus Motorsport’s new signing also experienced a nervous moment on an earlier fast lap when Dan Day made a dangerous re-entry after losing control of his Commodore at the Turn 5 sweeper.

That was one of three spins in the afternoon session for Day, who caused the first red flag when he hit the wall on his out lap in Practice 1.

The returning Taz Douglas caused the opening session’s other red flag when he brought his Image Racing Falcon to a halt after sustaining damage over the kerbs.

Debutant James Golding necessitated the sole stoppage of the second session when the Formula Ford front-runner found the wall in the Dragon Motor Racing Commodore.

Chris Pither and Garry Jacobson rounded out the top five, Aaren Russell’s morning best stood up for sixth as he failed to set a time in Practice 2, while Andre Heimgartner, Taz Douglas, Andrew Jones, and Paul Morris made up the top ten.