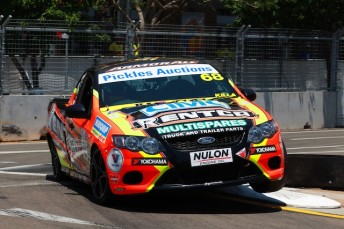 Kris Walton laid down a marker to his title challengers as he set the fastest time in practice for the Australian V8 Utes Series at the Sydney NRMA 500.

The series leader ended the day a quarter of a second clear of outgoing champion Ryal Harris as he went to the top late in the second session with a 1:45.21s on his seventh lap.

Harris, who similarly bettered Walton for first position late in the opening 20-minute session, was content to sit out the second half of Practice 2 after being the first of four men to lap in the 1:45s on just his second lap.

Ryan Hansford made it two Peters Motorsport entries in the top three after enjoying the briefest of periods as the fast man early in the session, edging out mathematical title hope and fellow short-time leader Rhys McNally.

Of the other series contenders, second-placed David Sieders finished the day fifth fastest while third placed Jesse Dixon could only managed 16th in practice.

Fisher’s prang was nevertheless overshadowed by a spectacular engine failure for Danny Buzadzic at the same corner just moments later, the large smoke cloud resembling a small bushfire from the wide shots of the Sydney Olympic Park venue.

Meanwhile, Ryan Simpson will start the opening V8 Touring Cars race from pole position after he took out qualifying by 1.2s from Drew Russell and Matt Chahda.

The third-tier V8 category for ex-V8 Supercars is holding a non-championship round at the Sydney NRMA 500 as a replacement for the Australian Formula 3 Championship, which was a late withdrawal from the program.

V8 Utes qualifying commences at 0930 tomorrow before their first nine-lap race at 1200, while the first two of the V8 Touring Cars’ three races will be held at 0825 and 1045 respectively.