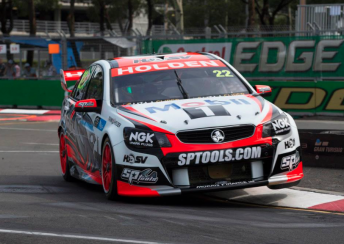 James Courtney led a Walkinshaw Racing lock-out of the top three places in the third and final Friday practice session at the Sydney NRMA 500.

Courtney’s best effort of 1:28.12s was the fastest time of the three 20 minute hit-outs, eclipsing Tander by just 0.04s.

Jamie Whincup had set the pace for much of the session before dropping to 11th during the final flurry of fast times.

Team-mate Craig Lowndes was 14th, with both among those to save their best tyres for Saturday morning’s final practice.

Marcos Ambrose continued his steady return to the championship in DJR’s wildcard, ending the day 24th.

The two-time champion had sat last on the sheets at the conclusion of the 20 minutes, before moving to within 1.44s of the pace with his final effort.

Ambrose was one place ahead of Winterbottom, who ended a quiet day for the #5 Pepsi FPR Falcon in 25th.

All 26 cars took part in the session following repairs to the Jason Bright Holden and James Moffat Nissan, which tagged the wall in separate Practice 2 incidents.