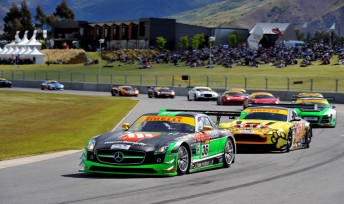 The move comes as V8 Supercars attempts to gain greater control over its support program, which will play a large part in its 2015 television package.

All support races are set to be shown live on Fox Sports next season, as well as the majority of practice and qualifying sessions.

The Australian GT Championship is scheduled to run four rounds with V8 Supercars, in addition to a single appearance with the Shannons Nationals and its standalone Highlands Park meeting.

Speedcafe.com understands that discussions between Quinn and V8 Supercars have taken place over recent weeks but that a deal is yet to be reached.

“I will confirm that we want to take better control of our support categories, whether that be via ownership or working with them and CAMS to improve the show,” he told the website.

Quinn is currently overseas and could not be contacted by Speedcafe.com for comment.

The AGTC is currently booming thanks largely to the global success of the FIA GT3 regulations, with the championship expecting capacity grids next year.

While GT3 cars also headline the Bathurst 12 Hour, the AGTC business has no formal link with the endurance event, which has a much publicised date clash with V8 Supercars next February.