Slade: Rosenberg exit ‘a big shame for everyone’

Slade: Rosenberg exit ‘a big shame for everyone’ 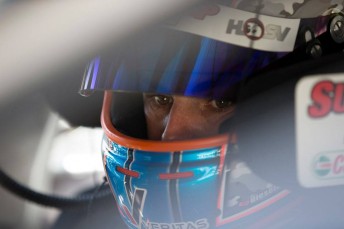 Walkinshaw Racing driver Tim Slade has expressed his disappointment over news that long-time supporter James Rosenberg has parked his Racing Entitlements Contract ahead of 2015.

As revealed on Wednesday, Rosenberg elected against entering his #222 REC for the 2015 championship by Monday’s deadline, handing the license back to V8 Supercars.

The move, brought about due to a funding shortfall for the entry, has thrown driver Nick Percat’s future into doubt.

Speaking after clocking the third fastest time behind Walkinshaw stable-mates James Courtney and Garth Tander in Friday practice for the Sydney 500, Slade said that the shake-up was a sign of the challenges faced in motor racing.

Slade had raced under Rosenberg’s REC from 2010, when the license was purchased from Paul Cruickshank Racing, until the end of last season.

The now 29-year-old had also received support from Rosenberg during his junior career, which included purchasing the Holden that the driver made his full-time V8 Supercars Championship debut in at Paul Morris Motorsport in 2009.

“It’s a big shame obviously for Nick, but for everyone involved, Nick, James Rosenberg and the whole team,” said Slade.

“It’s not what anyone wanted. Nick has had a really good first year and has proven he belongs in the category.

“It’s obviously pretty tough out there financially and I guess they just couldn’t make ends meet.

“It’s unfortunate but it just shows you that motor racing is an extremely tough game and you need everything in your favour to keep it rolling on.

“Hopefully Nick can find something for the future. Personally I think he’s done something to warrant that he belongs here.

“Me personally, having a super close relationship with James Rosenberg in the past, he’s been a massive part of my career.

“It’s a shame for him that he’s had to park his license as well.”

As previously reported, Walkinshaw Racing is expected to remain a four-car squad next year, with Charlie Schwerkolt and recently signed driver Lee Holdsworth having been strongly linked to the vacancy created by Rosenberg’s departure.