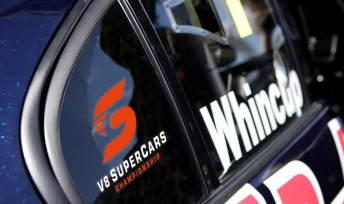 Speedcafe.com’s Stefan Batholomaeus spoke with V8 Supercars CEO James Warburton following the announcement that the category will dramatically open up its regulations for 2017.

SPEEDCAFE: James, the majority of championships around the world have progressively made their engine regulations tighter and towards a common spec over recent years and decades.

What you’ve announced with Gen2 is completely in the other direction. Tell us why this is the right move for V8 Supercars?

JAMES WARBURTON: We’ve spoken to a lot of people and the reality is that we’ve got the best touring car product on the planet.

I think our parity… the reason we’re so loved around the world is for that reason. Everything in terms of the closeness of racing, the spread of the field and everything else.

You’ve got to start with what you’ve got, rather than throwing everything out and starting again (with a new formula).

This category has made great decisions about the racing product and we believe it’s about a blend of both in the future, rather than going in a different direction.

We’re starting with the strength of what we’ve got and adapting it, as opposed to starting again with something different.

SPEEDCAFE: Presumably though the mandate is to be as open as possible in order to make it as welcoming as possible for new players?

WARBURTON: Yes, but don’t forget that those new players will have to step up to the mark too. We’re not going to dumb it down.

If you take half of our field being privateers (non-factory backed teams), they’re probably going to be no real reason for them to change, unless they’ve found a different funding model or a cheaper engine supply model.

These guys (new manufacturers) are going to be at a point where they have to step up and deliver the performance, as we’ve seen with the incoming manufacturers in the last two years.

If we’re going to retain our existing manufacturers and attract new ones moving forwards, you’ve got to remove the barrier and have the flexibility in terms of allowing the DNA that they want to bring to the sport.

SPEEDCAFE: In hindsight were the Car of the Future rules, particularly in terms of engines, too restrictive? Did you not go far enough in ‘opening the shop front’?

WARBURTON: I think it was very successful. We sit here today with a sport that’s growing and with new brands getting value out of it.

I think there were areas that were challenging from a technological point of view and it’s certainly been a focus of mine from day one to ramp up the resourcing and the technical specs.

That’s where we’ve got to very, very quickly. So now away we go.

SPEEDCAFE: The way you’ve opened this up though, it’s going to be a major technical challenge for the championship. Are you confident that you can rise to that challenge?

WARBURTON: Absolutely. But more importantly our technical team and our team owners believe that can be the case. I’m relying on their experience.

When you look at what we’ve got, the way we now manage the engines and everything else, we’re now fielding a lot of inbound inquiry about what we’re doing.

People are looking at us and going ‘what a great system’. Don’t be confused by the ‘not invented here’ syndrome, we’ve actually done a pretty bloody good job.

SPEEDCAFE: You’ve said that the parity system will remain based around the cumulative horsepower concept. Are you expecting the actual performance level to be about the same as now?

WARBURTON: Yes. Again, we’ve got to get the final spec, but we’ve got to be very careful about the DNA of who we are and what we are.

We’ve still got to have the incumbents setting the bench(mark) and having the new participants proving their level of performance. I think that’s important as well.

SPEEDCAFE: When the Car of the Future was under development V8 Supercars built its own prototype cars for testing. Is anything like that (V8 Supercars building prototypes) going to occur on the engine front?

WARBURTON: Potentially. We’ve got three offers in terms of people (manufacturers) that want to build engines and start testing.

SPEEDCAFE: When do you expect that one could be up and running? Are there timelines on that?

WARBURTON: Not at the moment. The draft specs will be in June and the final lock-off will be in December next year.

It’s important to understand as well that if you look at a range of manufacturers, they already have (racing) engines that exist, for which meeting the proposed thresholds will be quite straightforward.

SPEEDCAFE: You’ve mentioned consultation with manufacturers, teams, sponsors and fans, but has there also been communication with other championships around the world?

WARBURTON: There has been some discussions. The technical department went on a global tour and met with a number of series and teams around the world.

There was a hefty engagement with British Touring Cars to look at what was on offer and if there was anything we can learn from them.

But I don’t think there are any secrets. We’ve already got everyone’s tech specs and vice versa.

SPEEDCAFE: Has the ability to slot in an existing race engine from a manufacturer’s global racing program been a key goal in what you’ve tried to achieve with this concept?

WARBURTON: I think that’s a good outcome in terms of cost for the teams owners.

The potential… there’s probably eight manufacturers that have engines from other racing programs that they can put in.

As long as they can meet our spec (performance) then that’s a win-win for all involved, absolutely.

The turbo engines in particular are going to be relatively easy to dial into our cumulative horsepower formula, compared to the naturally aspirated engines.

There’s three or four that we’ve seen that could be adapted relatively easily and I think if you look forward to the proposed DTM regulations from 2017, that provides another opportunity for re-use of either engines or technology from those manufacturers, should they be interested in being involved.