V8 Supercars has outlined its vision for the category’s technical future, confirming that it will open up engine and body shape regulations in 2017.

The key messages of V8 Supercars’ white paper, compiled by CEO James Warburton, were revealed to media at the grand final lunch ahead of the Sydney NRMA 500.

Chiefly, Warburton confirmed that the Gen2 platform “opens the way for additional engine and body configurations to compete alongside current V8 engines and four door sedans.”

Turbo-charged six and four-cylinder motors racing alongside the current V8s have been mooted by the category as the most likely options to be taken up.

The opening of the body shape eligibility has also been presented broadly in a bid to entice more manufacturers into the sport, which suffered the blow of Ford’s withdrawal announcement earlier this week.

“The top-line guidelines dictate that the (eligible) car must be publicly available for sale in Australia, is front engine, right hand drive and a full four-seat configuration,” confirmed a V8 Supercars statement.

“The race car must be rear wheel drive and accurately reflect the look of the road car, retaining the essential DNA of the sport.

“All cars will use the existing Car of the Future chassis and control components, and be subject to engine and aero parity rules.”

Warburton, who consulted with a number of currently participating and non-participating manufacturers while structuring the white paper, stressed that opening up the rule was vital for the car companies.

“It is imperative to keep the sport relevant to the current environment, entertaining and, critically, viable for the race teams,” said Warburton.

“The current climate in world motorsport is absolutely clear. Manufacturers want choice in what they go racing with, otherwise they won’t participate. 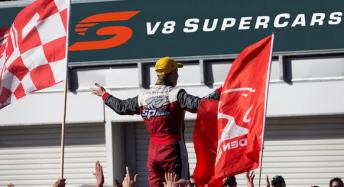 The new branding V8 Supercars will use from 2015

“They want their DNA represented and so do we. We will not compromise our DNA – fast, loud and fierce racing.”

Two working groups, one focussed on the engine regulations and the other on body configurations, will draft the new technical regulations over the next 12 months.

“The rules will ensure no engine or body configuration has any advantage or disadvantage over another,” declared a V8 Supercars statement.

“The groups will be headed by V8 Supercars’ motorsport department which will be tasked with making recommendations to the V8 Supercars Commission which includes representatives of V8 Supercars, race teams and independents.

“These groups will consult with participating manufacturers and teams throughout the process.

“The technical groups will aim to publish draft engine and body style operating guidelines for discussion by mid-2015.

“These guidelines will be defined towards the end of 2015, allowing testing to commence from February 2016.”

A new category logo will also be rolled out for use from 2015 featuring a stylised ‘SC’ with S in red and C in white with V8 Supercars positioned underneath as it transitions to a fresh engine era from 2017.