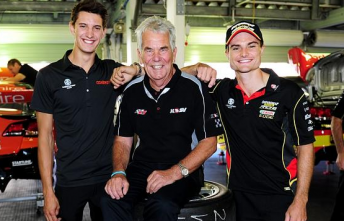 Walkinshaw Racing is set to undergo a surprise shake-up following a decision by James Rosenberg to surrender his #222 license to V8 Supercars ahead of 2015.

The combination of a lack of REC revenue and a difficult sponsorship market has seen the car run at a significant loss, which had to be underwritten by the South Australian businessman.

Although annual revenues of up to $500,000 have been promised to each REC holder from next year, the team’s struggle to lock down a full commercial package has seen Rosenberg elect to call it quits.

While the move leaves Percat without a seat despite a strong rookie season, Walkinshaw may yet continue with four cars.

Charlie Schwerkolt, whose #18 REC has run out of Ford Performance Racing for the last two seasons, has been strongly linked to the vacancy along with his recently signed driver Lee Holdsworth.

Schwerkolt is yet to clinch a primary sponsor for 2015 and is thought to be seeking a more economically viable alternative than remaining at FPR.

A switch would complete a bizarre silly season for Holdsworth, who announced in August that he had re-signed with Erebus Motorsport before confirming the leap to Schwerkolt and FPR three weeks ago.

Neither Schwerkolt nor Walkinshaw Racing management responded to Speedcafe.com’s enquiries on Tuesday.

A move by Schwerkolt would smooth the way for the arrival at FPR of Super Black Racing, which plans to run a car for Andre Heimgartner from the team’s Campbellfield headquarters next year.

As previously reported, Super Black’s deal to run out of FPR utilising the second Dick Johnson Racing REC has created waves, with rivals adamant that it will breach regulations stipulating no more than four cars per team.

Regardless of Schwerkolt’s future, the REC to be used by Super Black is expected to remain under the ownership and control of DJR co-owner Steve Brabeck as part of plans to separate it from the other FPR entries.

Like Percat at Walkinshaw, the REC movement at DJR ahead of its Team Penske makeover sees fellow young star Scott Pye without a full-time drive.

Although yet to be made official, it is understood that a total of 25 entries were received by V8 Supercars ahead of Monday’s strict deadline.

Lucas Dumbrell Motorsport will again expand to two cars after entering its second REC that had been subject to a legal dispute while parked throughout this season.

The team is yet to confirm drivers for either entry ahead of current pilot Russell Ingall’s farewell this weekend.

The Triple F Racing and Tony D’Alberto Racing RECs are thought to have missed the deadline, despite the latter’s efforts to field a second car out of Tekno Autosports.

The exit of Rosenberg meanwhile ends a five-year run of REC ownership for the long-time supporter of young racing talent.

Rosenberg bought his license from Paul Cruickshank Racing at the end of 2009, initially running it as a third Stone Brothers Racing entry for Tim Slade.

The partnership continued for four seasons, including a year under the Erebus Motorsport banner, before Slade and Rosenberg moved independently to Walkinshaw Racing for 2014.

Slade signed to drive the Supercheap Auto Holden under one of Walkinshaw’s own three RECs, while Rosenberg’s inclusion ensured the addition of the fourth car for Percat.