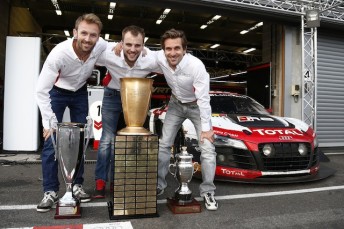 The German-based squad will enter two Class A Audi R8 LMS GT3s in the Mount Panorama endurance classic on February 6-8, splitting its Blancpain Endurance Series stars over both entries.

This will be Vanthoor’s second visit to the mountain having led Phoenix Racing’s sole entry in this year’s race, while the experienced Hasse and Baumgartner will make their debut.

The latter’s only previous racing experience came at this year’s Nurburgring 24 Hour with the Austrian most famous for his stratosphere leap.

Audi are planning to resurrect a livery similar to the crocodile scheme used by the Audi R8 prototype which won the Race of  Thousand Years at Adelaide in 2000.

Rast and Winkelhock also competed in the event last year while Mapelli is rated as one of the rising young stars of GT racing having contended for this year’s Italian GT Championship.

The #15 Audi R8 of the German-Italian trio will run a distinctive livery, modeled on the ‘kangaroo car’ that won the race in 2012.

“The track is one of the most spectacular ones worldwide, the 12-hour race has long become a classic and in 2015 we’re expecting to meet with a larger number of rivals than ever before,” said Romolo Liebchen, head of Audi Sport customer racing.

“Our aim is to battle for our third victory even though this will probably be the toughest race we’ve ever contested there.”