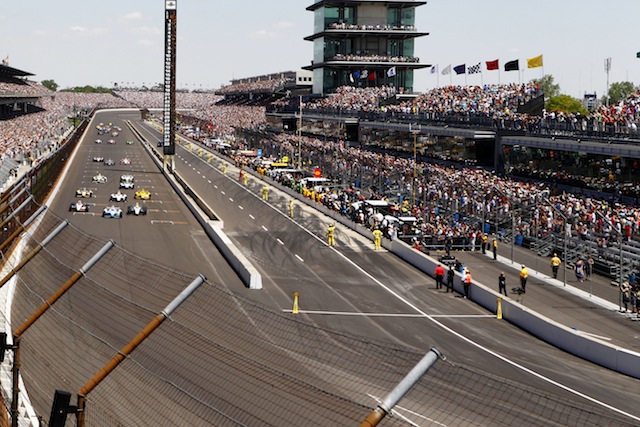 A host of changes have been drafted into the 2015 Verizon IndyCar Series highlighted by a reduction in the number of double points races and the axing of standing starts.

The signature Indianapolis 500 will continue to carry double points as will the newly positioned final round at Sonoma however Pocono, the third round which carried the bonus points, will revert back to normal points.

The changes came as teams were this week handed the revised rulebooks across the sporting and technical regulations.

Standing starts were introduced at Toronto in 2013 and increased to four rounds this year but the series has decided to abolish them altogether in preference for its traditional rolling starts.

“The best thing the sanctioning body can provide competitors, manufacturers and fans is a stable, consistent rulebook, so most of the changes for 2015 are clarifying and tidying up definitions,” IndyCar president of competition and operations, Derrick Walker said.

“The rulebook is continuously evolving and we always look to refine it to make the product better.”

Sonoma replaces Auto Club Speedway as the final round next year on August 30.

The superspeedway had also carried double points with Australia’s Will Power clinching the title this year.

Under the double points arrangement, 100 points will be awarded to the winner, 80 for second and 70 for third with the system continuing on a sliding scale.

Bonus points continue in 2015 with two for most race laps led, one for pole position (except the Indy 500) and one point for at least one lap in the race lead.

The Indy 500 sees every runner score points in the May 16-17 qualifying runs while nine points will be offered to the pole position winner at the Brickyard.

“We look at the new calendar and analyse how many cars would be in contention for the championship after certain events,” Walker said.

“And the best trend with multiple cars racing for the championship was weighting it for the final race and the Indy 500, which is a special race deserving of double points.”

Engine Manufacturer Championship points have also been revised to further reward reliability and competitiveness of the Chevrolet and Honda 2.2-litre, twin-turbocharged V6 engines.

The top three finishing positions by each manufacturer will score points, changing from the previously awarded top five overall.

Additional points are available to the manufacturers for:

If an engine fails to complete the life cycle, a 20 point dedication will be levied against the manufacturer’s total as well as an engine which sees a non-minor repair that requires a component change.

Additional highlights from the 2015 Verizon IndyCar Series rulebook include:

* Standing starts, which were introduced in 2013 at Toronto and utilised at four venues in 2014, have been eliminated for the 2015 season.

* Qualification groups for road/street course races shall be determined by the practice session prior to Segment 1 of the three rounds of qualifying.

*Qualifying will continue to set the pit lane assignment for the following event, but rule 7.4.1 addresses changing drivers between events, such as Ed Carpenter and Mike Conway with Ed Carpenter Racing in 2014. When Conway, who drove 12 road/street course races in the No. 20 entry, yielded to Carpenter for an oval race (and vice versa), the No. 20 car was assigned the last pit stall from pit out. Under the new rule, the entrant will retain the pit assignment based upon qualifying position from the previous event, regardless of driver.

* Each of the speed phases of the Rookie Orientation Program for the Indianapolis 500 Mile Race have been increased 5 mph. In addition to car control, placement and a consistent driving pattern, the Rookie Orientation Program shall consist of three phases totaling 40 laps: Phase One of 10 laps at 205-210 mph, Phase Two of 15 laps at 210-215 mph and Phase Three of 15 laps at 215+ mph. The laps do not have to be consecutive. The phases and corresponding speeds may be adjusted based on track/weather conditions.

* Correspondingly, the Indianapolis 500 refresher test for drivers will consist of 30 total laps (the second and third phases of the Rookie Orientation Program).