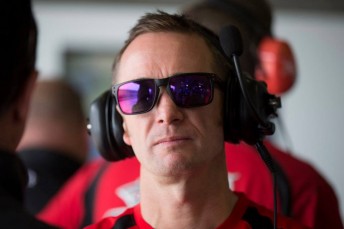 Greg Murphy is set to step away from co-driver duties in the Pirtek Enduro Cup next season as he moves into the role of V8 Supercars commentator.

The four-time Bathurst winner has been a part of the Holden Racing Team’s endurance line-up in the two endurance campaigns since his final full-time V8 Supercars season in 2012.

Although yet to be announced, next year will see Murphy take up a commentary role with V8TV, where he is expected to call the category’s races for both Fox Sports and Network Ten alongside Neil Crompton.

While Murphy gave a firm no comment when approached by Speedcafe.com about his 2015 plans, it is understood that the HRT has already been informed of the 42-year-old’s decision.

Murphy has competed in the Bathurst 1000 each year since his debut in a Toyota Carina in 1994.

Murphy’s greatest Bathurst moment, however, is often considered his 2003 pole lap, where a 2:06.86s lap saw him over a second clear of his nearest rival.

In a move thought unrelated to his exit from the Enduro Cup, Murphy has confirmed that he will not return to the NZ SuperTourer Series next year.

The local hero has been the star of the class since it was formed three years ago, winning the title in 2013 and 2014.

The championship has been beset by technical squabbles since its outset, leaving Murphy frustrated and ready to step away.

“I went back into it three years ago for various reasons and now it’s time to move on,” he said.

“The last few rounds weren’t as enjoyable as I hoped they’d be due to lots of issues within the series that left a bad taste in the mouth of myself and the other M3 Motorsport guys.

“It’s a real shame because there’s been a lot of money and effort put into it. It’s a shame that it’s heading where it’s heading.

“I primarily went into it to support New Zealand motorsport because I believed in the series. The concept is still good, but it’s not being run as good as it could be. That’s a shame.”

Murphy confirmed that the three-car M3 Motorsport, which he co-owns with Kiwis Graham Moore and Paul Manuell, is up for sale.

“The team is for sale as a going concern and if it’s not sold it’ll be split up and cease to operate,” he said.

The SuperTourers season now takes a two month break before recommencing with the first sprint round at Hampton Downs on January 31 – February 1.