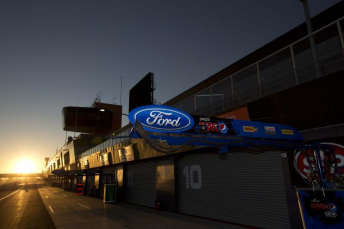 Ford’s Australian racing legends and its longest running rival, Holden, have reflected on news that Ford will quit the sport at the end of 2015.

The manufacturer announced its decision on Monday, confirming that it will provide limited support to Ford Performance Racing next year before a complete withdrawal.

FPR, likely to revert to its Prodrive Racing Australia nameplate, says it expects to run its new FG X model Falcon for two seasons before the category’s new rule package kicks in for 2017.

Dick Johnson Racing does not currently receive financial support from Ford and, with new majority owner Team Penske, is already on record as looking beyond the Blue Oval for 2016.

Johnson’s connection with the Detroit giant stretches back to the 1970s when he was backed by Bryan Byrt Ford in Brisbane.

“It’s a sad day as far as I’m concerned because our whole team has been surrounded around Ford since 1976,” Johnson told Speedcafe.com in the wake of the announcement.

“It’s been good to us; we’ve won a lot of championships (seven titles and three Bathurst 1000s) and it’s all been in Fords.

“There’s been ups and downs. Ford have been in and out of motorsport over the years, so come the end of 2015 they (Ford) may change their mind, who knows. I’m an eternal optimist, let’s put it that way.” Former long-time DJR driver John Bowe, who collected his two Bathurst wins (1989 and 1994) and his championship in 1995 in Fords, says the company has always underestimated the power of motorsport in Australia.

“I just think that Ford have always underestimated the motorsport image in Australia and they have been very wishy washy depending on who is at the helm,” Bowe told Speedcafe.com

“The people at Ford locally don’t get it and have very rarely got it.

“I feel sorry for the fans. Motorsport has such a diverse following in Australia. I don’t understand it.

“When you see Volvo using motorsport success to build their brand and Nissan doing the same, its sad (that Ford has pulled out).

“Ultimately its Ford’s decision and it will be Ford’s loss. I’m not so sure if it will have a knock on in terms of their car sales, but I think what it does is it dilutes their image and their image will just sink back into the pool.”

The Ford vs Holden rivalry has underpinned Australian touring car racing for six decades, with V8 Supercars the sole domain of the two marques between 1994 and 2012.

With Nissan and Volvo currently fielding factory teams following the introduction of the Car of the Future last year, Holden Motorsport manager Simon McNamara says that other rivalries will eventually grow.

“It will be sad to see Ford go but times change and its management has made a decision on what it sees is best for its business,” he told Speedcafe.com.

“It will mean the end of the traditional Holden versus Ford rivalry but there is a lot of racing to be had before they do leave.

“There are other manufacturers providing new challenges as well.”