Mark Webber has been involved in a massive accident in the closing stages of the World Endurance Championship race in Brazil.

Webber’s #20 Porsche and the #90 Ferrari driven by Italian Matteo Cressoni collided with the 919 Hybrid coming to rest near the entry to pitlane at the Interlagos circuit.

The crumpled wreckage of Webber’s Porsche saw an oil fire burning before he was extricated from the car and placed on a stretcher.

The Australian raised an arm and gave the thumbs up as he was being placed into the ambulance.

He has been taken to a local hospital for further checks and is awake and alert. Doctors have allowed Webber to receive visitors.

Porsche LMP1 vice president Fritz Enzinger said Webber’s team-mates Timo Bernhard and Kiwi Brendon Hartley have been among those to visit him in Bandeirantes Hospital.

“The most important news of today is that, given the circumstances, Mark Webber is in good condition, according to the first information from the doctors,” Enzinger said.

Webber, who started the race from pole position, was running sixth at the time of the accident with the sister car, the #14 Porsche driven by Neel Jani leading the race. 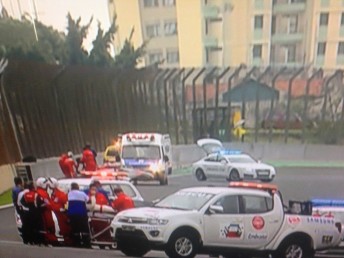 Romain Dumas, driver of the #14 Porsche said: “He was talking on the radio he knows his name, he knows where he is, it looks okay.”

Cressoni was uninjured in the incident after climbing out of his Ferrari 458 and talking to medical officials.

The FIA have said that Webber has been taken to the medical centre for further assessment.

It is the second time the two times Brazilian F1 grand prix winner Webber has suffered a crash at the same spot after a nasty crash in his Jaguar in 2003.

Reasons for how the accident happened remain unclear with Porsche saying it will investigate data and the wreckage of the 919.

See below video of the accident