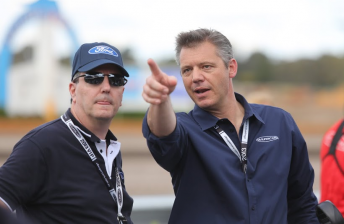 V8 Supercars CEO James Warburton has expressed his disappointment at Ford’s decision to withdraw all support from the category at the end of the 2015 season.

Ford has announced this afternoon that it will “provide support” to teams racing Falcons next year, but will not renew any funding for 2016.

The confirmation ends months of discussions between Ford, FPR and V8 Supercars over ways for the manufacturer to remain involved.

“Some time ago, we called on Ford to clarify their position for 2016 – which they have now done,” said Warburton in a statement.

“Clearly we are disappointed in their decision to cease financial support for FPR beyond 2015.

“We understand things are tough at Ford at the moment, but were hopeful they would continue to see the enormous brand value our sport has to them, not to mention decades of Blue Oval racing heritage – particularly at a time when we are growing so strongly.

“In any case, we look forward to welcoming Ford back to our sport at some time in the future.”

Holden, Nissan and Volvo are all committed to V8 Supercars for the next two seasons, while Erebus is yet to confirm a continuation of its customer agreement with Mercedes-AMG.