FPR looks ahead after Ford announcement

FPR looks ahead after Ford announcement 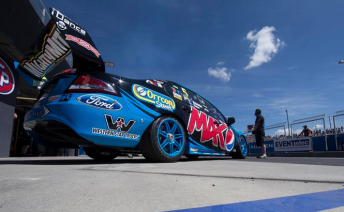 Ford Performance Racing has lost its factory backing for 2016

Ford Performance Racing says it will now explore its options following confirmation that Ford will withdraw support at the end of next season.

Ford has announced this afternoon that it will discontinue its involvement in the category after 2015.

FPR is expected to run under the banner of Prodrive Racing Australia from next season, although says no decision has yet been made on the timing of a complete rebranding.

Initially founded by British engineering firm Prodrive in 2003, the team has run under the FPR brand throughout its existence.

The squad was bought from Prodrive at the end of 2012 by Rod Nash and Rusty French, who purchased the rights to the Prodrive Racing Australia moniker as part of the agreement.

In a statement issued under the PRA masthead, team principal Tim Edwards noted that it will likely race its new Falcon FG X for two seasons before the category’s regulation changes take hold in 2017.

“Ford Australia’s decision to not extend its commercial relationship with our team beyond the end of next season is extremely disappointing for our large and loyal fan base, but as a business this decision now allows us to concentrate on our long-term future,” Edwards said in a statement.

“We have enjoyed a highly-successful relationship with Ford Australia with just shy of 50 race wins, 150 podiums and the last two Bathurst 1000 crowns together.

“This on track success, along with the engineering and commercial strength that underpins our racing activities, provides us with a very viable business and a strong platform for our future in the sport.

“We will run the new FG X Falcon next season as planned with support from Ford, and we’ll possibly campaign the car in 2016 ahead of the major regulation changes coming from 2017.

“Now that we know where we stand we can further develop other opportunities. We have a range of options, some existing and some that were awaiting this decision, so we can now begin to explore these further.

“Whatever happens, I know our loyal fans will support our team whatever direction we take.”

Nash also expressed his desire to look towards the future.

“When (fellow co-owner) Rusty French and I purchased the team two years ago we did so because we saw a strong and diverse business, filled with vibrant people and all with a desire to succeed,” Nash said.

“That hasn’t changed today and nor will it based on the decision of one of our commercial partners. We have a broad revenue base and this decision does not weaken the viability of our business.

“Our team of people have been working tirelessly, with support from V8 Supercars, to ensure a blue presence in our sport so while we don’t agree with today’s decision, we have no choice but to accept it.

“While I sympathise with the legions of Ford fans, they are also fans of our team and our drivers, so whatever direction we take we firmly believe that support will continue.

“Our immediate focus is of course this week and finishing off the season strongly in Sydney. We want to secure Mark second in the points and try and top off Chaz’s Bathurst-winning year with more success.

“Once we’re done in Sydney we can begin working on the future and exploring our range of opportunities.”

The squad has also formed a technical services agreement with new entrant Super Black Racing for 2015, which is expected to see the Kiwi effort run under DJR Team Penske’s second Racing Entitlements Contract.