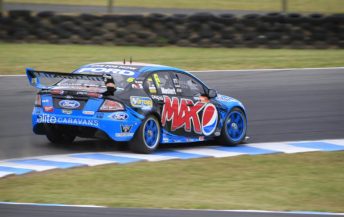 Ford has announced an end to its V8 Supercars efforts

Ford Australia will cut its involvement with the V8 Supercars Championship at the conclusion of the 2015 season.

Ford will support factory squad Ford Performance Racing in a reduced capacity next season before a complete withdrawal in 2016.

The news was flagged via an internal Ford email from president Bob Graziano today.

“As we continue to transform our business, we would like to share with you news that will break soon on decisions we are making to ensure a bright future for Ford Australia,” said Graziano.

“This afternoon, we will announce we will provide support to teams racing Ford Falcons in the 2015 V8 Supercars series but will not renew our sponsorships after the 2015 season.

“We are electing to invest our funds to continue expanding and refreshing our product lineup while delivering a leading consumer experience.

“You will hear much more about this investment at our “Go Further 2020: Experience the Future Today” event beginning next week.

“There has already been a lot of speculation and confusion about what this means for Ford going forward. Let me be clear about a few key points:

“Performance is part of our DNA, and will continue to be, as we increase our vehicle offerings and enthusiasts look for a wider range of performance models such as cars like Mustang, Fiesta ST and Focus ST.

“Ford is proud to launch the FG X Falcon, including building on our performance heritage by racing the new model in V8 Supercars in 2015.

“This decision is not a short-term plan as we transform our business.

“We are proud of the teams and our history in the series but have made this decision so we can move forward by focusing all of our attention on our great products and consumer experience.”

CLICK HERE for Ford Performance Racing’s reaction to the news

Confirmation of the end of Ford’s V8 Supercars program follows months of speculation that the manufacturer was set to withdraw.

Ford has assisted FPR in developing the new-for-2015 FG X bodywork package ahead of its debut in the 2015 V8 Supercars Championship.

Six Falcons are expected to take to the track next year, with FPR’s four entries joined by single cars from Super Black Racing and DJR Team Penske.