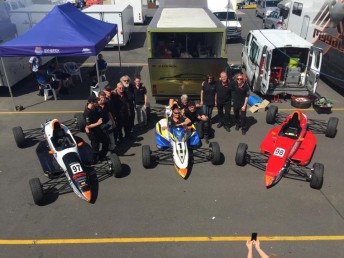 Second place in the third and final race of the weekend was enough to see the 18-year-old take the title by four points over Lloyd, with Golding just four points further adrift in third.

Randle and Golding entered the final race locked together on points, with Lloyd just two points away in third.

Lloyd and Randle swapped the lead in the early stages, holding each other up and allowing Nick Rowe and Golding into the lead battle.

Golding was soon in trouble however as an altercation saw him spin at Turn 2, forcing him to play catch up for the remainder of the race.

Following a spirited fight, Rowe eventually snuck ahead to take the win, with Randle in second and Lloyd third.

The title win for Randle’s DREAM Motorsport team comes just days after the squad announced a three-car entry into the 2015 Australian Formula Ford National Series and four-car assault on Formula 4.

Race 2 had earlier seen Lloyd made a statement in his BF Motorsport Mygale, taking victory ahead of Randle in yet another brilliant battle that saw the duo break away from the field to swap positions on each of the five laps.

Victorian State champion Cade Southall made the most of his local knowledge to claim the honours in the Kent class ahead of newly crowned Kent National Series winner James Garley and a recovering Cameron Walters. 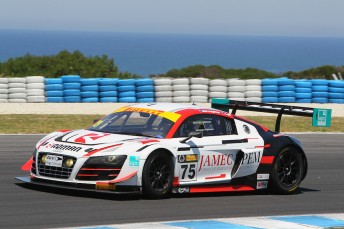 Steve McLaughlan and James Winslow on their way to victory. Pic courtesy of Steve Duggan www.sdpics.com

Highly fancied to win, Scott Andrews, suffered his second DNF of the weekend after tasting a close victory in Race 2.

Victorian Matt Stubbs meanwhile won the 2014 Formula Vee National Challenge at the Island Magic event, making an impressive last-ditch pass for the lead on the run to the flag.

James Dean and Daniel Stein made up the podium in a grid of 57 cars.

The pair took the chequered flag by 12.4s from the Porsche of Andrew MacPherson and Brad Shiels.

Peter Fitzgerald completed the podium behind the wheel of the EVA Racing Audi R8.