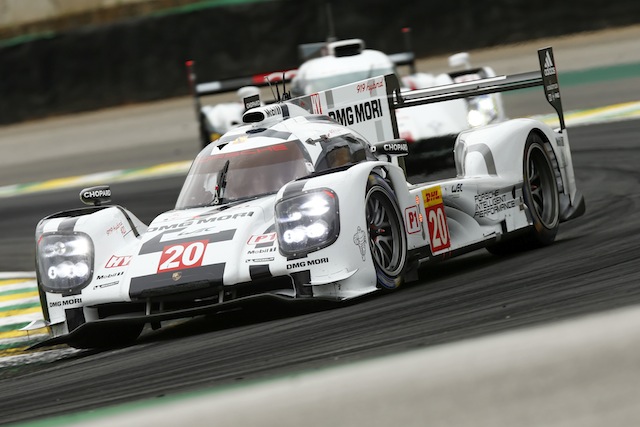 The Porsche LMP1 team has made a stunning start to the final round of the World Endurance Championship by clinching a 1-2 result in qualifying at Sao Paulo.

Spearheaded by Mark Webber and Timo Bernhard, the #20 Porsche 919 Hybrid claimed the pole position with a four lap average of 1:17.676s.

The #14 Porsche piloted by Romain Dumas and Marc Lieb fell .10s short and will start from second.

Webber was only third quickest after his initial outing but then returned to uncork more speed from the V4 2litre Hybrid.

”At my first attempt I messed it up and then Timo was super fast. But, as it is the average lap time what counts, I had to get back into the car and try to improve,” Webber said.

“Luckily it worked out, and with my last lap I was happy.

“Now we are looking forward to the race. Our positions couldn’t be better and we have a great team in the pits to do everything that is needed.”

Qualifying was reflective of the practice sessions at the Interlagos track which saw the two Porsches top the time sheets in both sessions.

The #8 Toyota driven by the already confirmed WEC champions Anthony Davidson and Sebastien Buemi will start the 6 Hour race at the Interlagos circuit from third position in the TS040 Hybrid.

Audi saw its #2 R18 e-tron quattro driven by Marcel Fassler and Benoit Treluyer qualify fourth to split the Toyota attack with the #7 TS040 of Alex Wurz and Stephane Sarrazin in fifth.

The retiring Tom Kristensen will start from sixth after the Dane and Lucas di Grassi served the qualifying duties in the #1 Audi.

The LMP2 class will see G-Drive start from pole for the seventh time in the eight-round WEC with Olivier Pla and Roman Rusinov leading the G-Drive Ligier Nissan to a 1:24.46s average.

Aston Martin claimed pole in both the GTE Pro and AM classes with Darren Turner and Stefan Mucke acing the Pro brigade while Paul Dalla Lana, Pedro Lamy and Chris Nygaard led a one-two for the team in AM qualifying.

Emerson Fittipaldi was fourth fastest in the AM category in the AF Corse Ferrari 458 Italia he is sharing after announcing a shock comeback.