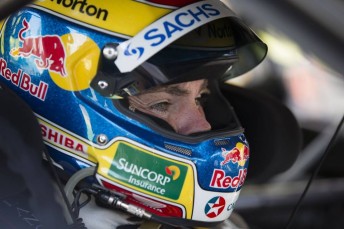 The 40-year-old Lowndes will battle it out for second in the standings at next weekend’s Sydney NRMA 500, aiming to help Red Bull to its fourth consecutive season one-two.

Whincup wrapped up the title, his sixth in seven years and fourth in succession, earlier this month at Phillip Island.

Lowndes has now finished behind Whincup in the standings for eight consecutive seasons during what has become one of Australian touring car racing’s longest running pairings.

The veteran, however, remains confident that his side of the team garage has all the ingredients needed to succeed and that he must simply put together a more complete campaign in order to turn the tables.

“Definitely,” Lowndes told Speedcafe.com when asked if he will push to remain at Red Bull when his current contract expires at the end of the 2015 season.

“The only thing that’s a negative (about being team-mates with Whincup) is the double-stacking.

“(But) when you’ve got two competitive drivers in one team, the second driver is always going to cop it.

“We’ve still got the ability to come second to him (Jamie), which is not a bad thing, and every now and then we win races.

“I’d rather sit here in a good car with a chance to win races and deal with it (pit stacking) when it comes up.”

Lowndes says that discussions with Red Bull team principal Roland Dane over a new contract will start during the coming off-season.

“Now that this championship has been won, we’ll sit down and work out what the future looks like,” he said.

“These things always take time, but hopefully we’ll have something done in the first half of next year.”

Whincup’s current deal with the team also expires at the end of 2015, but the 31-year-old is also showing no signs of looking to move on.

While Whincup is universally lauded for his dedication to success, Lowndes believes that self confidence has also played a major role in the unprecedented run.

“He’s very confident as a person and as a driver and believes in himself, which is very important,” said Lowndes of Whincup.

“Throughout a year everyone has their ups and downs but he’s strong week in, week out and he always makes the best of bad situations if they do occur.

“There’s no doubt he’s very dedicated as well, but I don’t think that’s any more so than a lot of guys.

“He works very closely with his engineer, which this year particularly is a credit to him, because he’s changed from one to another and built another bond.

“It’s the whole package that makes him very hard to beat.”

Lowndes has been looking for a fourth title since the last of his triumphs with the Holden Racing Team in 1999, but says his motivation remains strong.

“For us the motivation is the fact that we’ve got a team-mate who is so competitive and hungry to win all the time,” he said.

“I’ve not wavered at all. I’m looking forward to finishing this year, having a good break and then getting fit again for next season.”

The fan favourite adds that he has no thoughts of retirement and is already looking towards playing a role in Holden’s response to the next V8 Supercars rule package for 2017.

The ‘Gen 2’ rules, set to be outlined by the category on Wednesday, will open up the engine and body shape regulations in order to appease a changing automotive market.

The move will coincide with the end of production for the Australian-built Holden Commodore.

“I definitely want to be around to be a part of that development,” said Lowndes of driving into the next era.

“It’ll be interesting to see how it unfolds, what the Holden package looks like and what engine package we’ll have.

“There’s a lot of talk about turbo engines and all the rest of it, but it’s all unknown at the moment.”