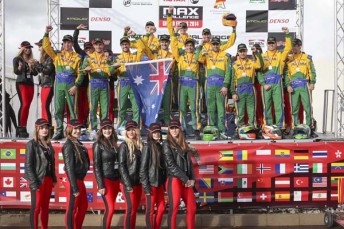 The 12 man strong Team Australia has recorded second place at the Rotax MAX Challenge Grand Finals after a tough outing for the team in Valencia, Spain.

With the Pre-Finals being cancelled due to heavy rain that soaked the circuit, many Australian drivers were forced to do it the hard way.

The best placed of the Australians was Jordan Boys who finished third in the DD2 field. The Victorian had been towards the front for much of the weekend and started the final on the second row of the grid. He ran second for much of the race before being knocked back to third in the dying stages. His fellow Australian DD2 finalist, Jason Pringle finished 18th. Victorian, Troy Woolston didn’t qualify

Former V8 Supercar star, Steven Ellery fought his way from 33rd on the grid in the DD2 Masters category to finish ninth, but was elevated to seventh after post-race technical infringements.

The Queenslander had to come through the last chance qualifier on Saturday and passed a mammoth 14 karts on the opening lap of the final. Hamish Leighton finished 13th, whilst Sydney-sider, Adam Hunter bowed out during the course of the final.

Darwin racer, Bryce Fullwood had been towards the front of the Junior Max class for much of the weekend, however spun on the opening lap of the final, dropping him to 33rd. He charged forward to finish 11th, one place ahead of Gold Coaster, Zane Goddard. New South Welshman, Jayden Ojeda didn’t qualify for the final.

In Senior Max, Ryan Kennedy was the best placed of the Aussies in 16th, whilst Brad Jenner and Andrew Carey were 26th and 27th respectively.