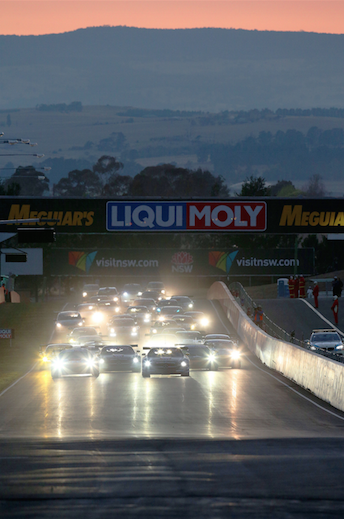 Speedcafe.com’s Stefan Bartholomaeus caught up with Bathurst 12 Hour director James O’Brien to talk about the event’s recent growth and its plan for the future.

SPEEDCAFE: James, from the outside, it’s been a bit of a surprise how quickly the Bathurst 12 Hour has grown since it went to GT3 in 2011. Has it been a surprise to you, or is this on schedule for where you thought it would be four years in?

JAMES O’BRIEN: I think it is (on schedule). In 2011, a lot of GT3 competitors stayed away and just wanted to have a look at it in the first year.

At the same time we lost a lot of the production car guys who were keen to keep it to themselves, so we ended up with a small field of only 26 or so cars.

There were a couple of years there while the event gained credibility, but then from 2013 we’ve seen real growth. That’s continued this year and now into next.

SPEEDCAFE: How much of a risk was it to move to GT3? Even after that first year, were you convinced that it was the way forward?

O’BRIEN: We were convinced that it was, but we just knew that we’d have to take some short term pain.

The big risk was that if the numbers dropped off too badly and it was a disaster commercially and from a sporting perspective… it was pretty marginal with only 20 or so cars around the Mountain.

But we got away with it in the first year and then we were off and running.

SPEEDCAFE: With the Class A field growing each year, is there a certain inevitability now that it will one day be solely a GT3 race?

O’BRIEN: I wouldn’t say it’s inevitable, but we’ll see after next year. If GT continues to grow globally and here in Australia, it’s possible that the event could be a GT race with invitational cars.

We’ll do a full review after next year’s race and very quickly determine what the composition of the race will be for the year after.

If you look at the 2015 field, there’s only seven production cars there at the moment. I suppose to some degree the market determines the composition.

The way the event’s unfolding it’s likely that (being GT and invitational only) will happen, but it just depends on the market.

SPEEDCAFE: The growth of GT3 racing worldwide has obviously benefited the 12 Hour, particularly in attracting international teams. You’ve run the Blancpain Endurance Series’ Balance of Performance parity rules over the last few years, but driver seeding remains a bone of contention. Is it possible to adopt the FIA’s driver ranking system in future?

O’BRIEN: It’s a simple case that to be classified in the FIA’s system, you have to participate in the FIA series. It wouldn’t be feasible for us to use it holistically because you couldn’t get all of our drivers classified.

We use that FIA system as a guide, particularly for international drivers, but for the Australian drivers, we need a bit of a different system.

It’s a bit of a hybrid and I think it works reasonably well, but whenever there’s some subjective decision making there’s going to be controversy. It’s a very difficult one to get right.

SPEEDCAFE: The speed of the single unseeded driver required in each entry currently plays a major role in deciding the race each year. Will we see all-Pro line-ups allowed in future, mirroring that at the top end of the Blancpain Series?

O’BRIEN: There’s always a possibility but as long as GT3 remains a gentleman driver’s category, as is the case in the Australian GT Championship at the moment, it’s unlikely.

We’ve got a different set-up to Europe in that just about all of our cars are owner-driver entries. 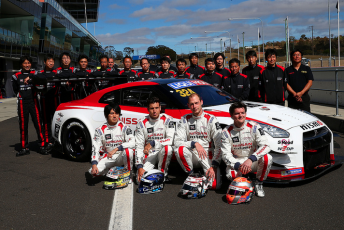 SPEEDCAFE: So keeping the non-seeded driver in there is the event’s way of looking after the local GT entries?

O’BRIEN: From a purist’s point of view we’d love to see no restrictions at all on the diver line-up, but I think that, while there would be some gun teams, it’d be at the expense of a lot of others.

On that basis, we’ll be keeping the requirement for at least one gentleman driver in each car for the foreseeable future.

SPEEDCAFE: In terms of the entry numbers, the 55 car cap has officially been scrapped. Is there a new ceiling in place?

O’BIEN: The official limit is the circuit’s grid capacity of 72, but while we’ve got (slower) production and invitational cars in there, we won’t be taking that many.

I dare say we won’t want too many more (than 55), but we’ve got to factor in losing a few in the lead-up to the event as well. That’s why we’ve loosened up the cap of 55.

We’ll take a few more (entries) and I don’t know what the final number will be, but it might be somewhere around 60.

SPEEDCAFE: There are a lot of people with fond memories of the Bathurst 24 Hour races here and the GT3 cars are of course built to run 24 hours. Is it in the long-term planning that this race could one day develop into that format, or is the model just set on 12 hours?

O’BRIEN: Right now it’s not on the agenda. Who knows what could happen in the future, but it’s not an objective or even a goal to move to 24 Hours.

SPEEDCAFE: Is it something you’ve discussed with competitors though, either here or overseas? There’s certainly some out there that would like to see it happen.

O’BRIEN: Yes, we’ve had informal discussions with various competitors about it.

It’s something of interest that pops up from time to time, but there’s not the stomach there nor is there a push from competitors in any sort of meaningful numbers to have it on the agenda at the moment.

I think a lot of the competitors are in love with the idea, but in practice it’s very difficult to do. There’s more (work) involved and your competitor pool shrinks for no great gain.

SPEEDCAFE: The clash next year between the 12 Hour and the pre-season V8 Supercars test has been a hot topic over recent months. Do you think it hurts your event, not having those drivers available?

O’BRIEN: It’s not beneficial, not having any of those divers, but is it going to hurt? I don’t think so.

I don’t think it will affect spectator numbers in any meaningful percentage or any of the entries. It’ll affect some driver line-ups, but there are plenty of suitable candidates to replace them.

By the looks of the number of officials that have signed on, it’s not going to hurt us there either.

It’s not ideal but I really don’t think it’ll have too much of a negative impact on our event. 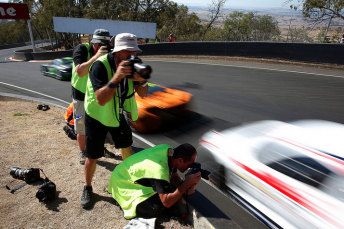 SPEEDCAFE: There’s been a lot of reaction to it (the clash), particularly through fans on social media, who have been very supportive of the 12 Hour. Have you absorbed much of that?

O’BRIEN: Yes, I’ve read lots of interesting comments, including some colourful ones…

SPEEDCAFE: Have you been surprised by the support the race has received?

O’BRIEN: It’s certainly nice to be recognised and receive support. It was very nice of V8 Supercars to give us the publicity.

It’s sort of a gift that’s just been giving and giving. We’re very thankful to them for that.

SPEEDCAFE: Most of the commentary on it has been from the V8 side. Have you deliberately stayed out of any slanging matches?

O’BRIEN: I just don’t see any purpose. We’re all one motorsport community and what is good for one is generally good for the other. If you’re fighting amongst yourselves you’re really struggling.

So I think it would have been better if there hadn’t of been a clash but they’re an organisation with a big calendar and obviously they’re welcome to schedule their test day whenever they see fit.

SPEEDCAFE: V8 Supercars has been quite vocal about an offer to combine the events. Did they ever approach you about having track time for their cars during the weekend?

O’BRIEN: Categorically, no. V8 Supercars approached us to acquire the media rights to the event for numerous reasons, one of which is they had so many drivers in the field.

Unfortunately that was at the 11th hour and while it was an attractive offer, the opportunity to get 12 hours on free-to-air was more beneficial for our event at the moment.

We thanked them for their offer and declined and shortly thereafter there was a clash of dates. But there was no discussion whatsoever about combining the events.

SPEEDCAFE: Did you ever look at changing your date, once the V8 date was released?

O’BRIEN: No, we never seriously considered it. I think it would have undermined our credibility immediately.

We’ve been working hard to establish an annual event that’s well organised, has solid rules and is consistent in its approach.

I think that changing our date would have been jumping at shadows.

SPEEDCAFE: The Seven deal is obviously a big step forward for the race in terms of TV, but there remains a fair way to go in boosting crowd numbers. Is that a key focus for you in the coming years?

O’BRIEN: It sounds quite simplistic but we’ve really focussed on the grid, both in terms of quality and quantity.

We think from that everything else will grow naturally as a result of that. Obviously we have a marketing strategy, but we haven’t put a huge amount of resources into it because there’s not a lot of point unless the product is really good.

But what we have done is tried to make it affordable, because once we get people to the event we think we’ll retain them and they’ll be our best advocates.

It’s a bit of a slow burn, but I’m expecting a healthy increase next year and into the future.

Where it ends up, it’s hard to say because it’s not a hit-and-giggle T20 (cricket), it’s 12 hours of motorsport at a regional location that will only ever appeal to a certain demographic.

We need to be realistic about spectators, but there’s plenty of room to grow in the future.