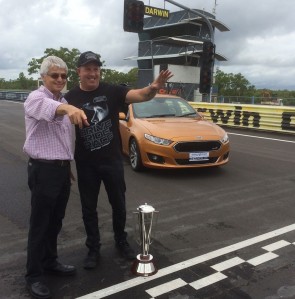 Morris was on hand to take selected people for rides around the 2.9km track in a Ford Falcon FG X.

The veteran driver who claimed the Supercheap Auto Bathurst 1000 in October alongside Ford Performance Racing star Chaz Mostert, was on hand to help the NT government launch a road safety campaign.

“They’ve had a few drifting days on it. It’s starting to green up and probably needs another month or two curing before its mint but it is smooth as,” Morris told Speedcafe.com

“I just took people for a bit of a burn around through NT Major Events and its general manager Paul Cattermole. We gave the new FG X a bit of a belt around.

“They are not scared of spending some money. The joint looks mint.

“They’ve sealed all the back car park now as well.”

Other areas targeted for work include a redesign of the Turn 1 left-hander as well as sewerage, drainage and toilet upgrades.

As previously reported, the first stage in the Northern Territory government’s upgrade package for the circuit has included replacing the earth filled tyre wall on the inside between the exit of Turn 1 and Turn 4 with concrete barriers.