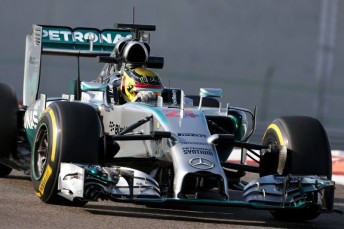 Mercedes’ Pascal Wehrlein topped the times on the final day of the Abu Dhabi test as McLaren continued to endure teething issues with its Honda powered development car.

The Mercedes reserve driver, who took over the running for the final day from Nico Rosberg, went on to set the fastest time of the entire test with a 1:42.624s effort.

The DTM racer completed 96 laps of the Yas Marina Circuit.

Ferrari’s Raffaele Marciello trailed the Mercedes by half a second while Max Verstappen was third fastest a little over a second adrift of the pacesetter.

McLaren was restricted to just two laps as the team continued to work around electrical problems with its Honda powered MP4-29H.

The car remained in the garage for the majority of the morning as the squad worked to trace the issue.

Reserve driver Stoffel Vandoorne eventually appeared on track in the afternoon but his track time was restricted by another mechanical problem.

The car failed to post a lap time completing just five laps during the entire end of season test.

“Although this looked like another difficult day, this is just part of the learning experience we expected when we took on the interim car programme,” said McLaren’s Eric Boullier.

“It’s useful to discover these issues pre-Christmas, as it allows us to deepen our understanding of the complex integration between power-unit, ancillaries and the car.

“And, to be honest, I’d rather be ironing out these problems here in Abu Dhabi, than discovering them in Jerez, next February.”

Marcus Ericssson completed the most mileage of the day having completed 112 laps to finish the day in fourth ahead of the Caterham of Will Stevens.

The FIA European F3 racer was 2.3s adrift of Wehrlein.

Red Bull Racing’s Daniel Ricciardo ended the day in seventh position having completed 88 laps before a technical issue caused his RB10 to catch fire while on track.