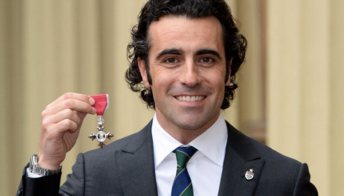 Dario Franchitti with his MBE

Champion IndyCar driver Dario Franchitti has received his Member of the Order of the British Empire (MBE) gong from the Duke of Cambridge at Buckingham Palace.

The 41-year-old found himself on the Queen’s Birthday Honours list in June, nominated for his services to motor racing.

“It’s a wonderful tribute,” Franchitti said in a report in the Edinburgh Evening News.

Franchitti was forced to retire from his highly decorated American single-seater career following an horrific crash at the Houston street race last year.

Franchitti captured three wins in the Indianapolis 500 and four IndyCar Championships in a stunning career.

Following his retirement the Scotsman remains a consultant to the Chip Ganassi team and is involved with charities and several other commercial concerns.