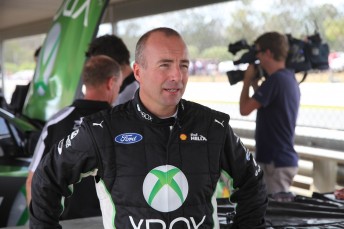 Australia’s sports betting agencies are bracing themselves for the return of Marcos Ambrose by rating the former champion a serious winning threat at the Sydney NRMA 500.

Early betting markets for the opening leg of the Sydney event see Ambrose rated as short as a $9 chance to win.

Jamie Whincup, who claimed a record sixth Australian championship at Phillip Island, is unsurprisingly assessed as favourite at odds ranging between $3.50-$4 with various betting shops.

Ambrose today completes his preparation for his first V8 Supercars start in nine years with the second of a two fully fledged test days at Queensland Raceway.

The tests followed last week’s widely publicised ride day which revealed Xbox as the primary backer of his #66 DJR Ford entry along with a return of old major sponsor Pirtek.

“Punters obviously believe Marcos Ambrose can make an immediate impact in his return to the V8’s – more money has been placed on him than any other driver to win Race 1 of the NRMA 500 which is quite incredible,” said Sportsbet.com.au’s Christian Jantzen.

“We have Ambrose on the seventh line of betting at $11 but with the flood of money coming in, I think you’ll find him starting much shorter than that as we get closer to practice.

“DJR haven’t exactly been setting the world on fire but the class and experience of Ambrose shapes as a bit of a wildcard at the NRMA 500,” he added.

“There’s no doubt punters are getting behind Ambrose because of what he’s done in the past in the V8 Supercars.

“In reality it’ll be a tough ask for him to jump straight back into the DJR Falcon and match it with the likes of Whincup, Van Gisbergen and Lowndes.”

Despite the relatively short odds for Ambrose, the 2003 and 2004 V8 Supercars champion is taking a cautious approach to the event which made its way onto the calendar in 2009 when the Launceston native was in the middle of his NASCAR career.

“It’s a chance to do some starts, do some pit stops, race against the guys and seeing what it’s all about.

Sportsbet prices for Race 1 at the Sydney NRMA 500