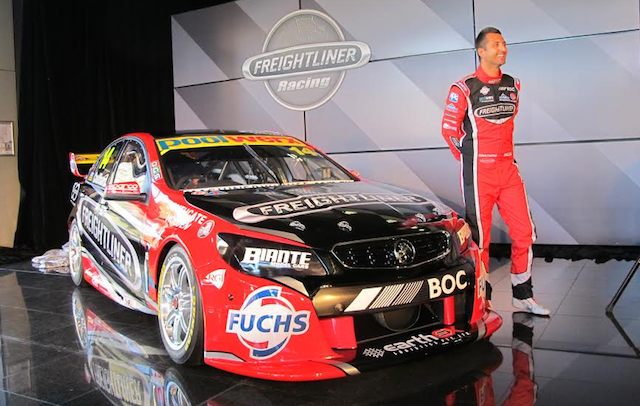 Fabian Coulthard with the Freightliner Commodore Brad Jones Racing has revealed the Freightliner sponsorship and livery that Fabian Coulthard’s #14 Holden will campaign in next year’s V8 Supercars Championship.

The truck brand, which celebrates its 25th anniversary in Australia this year, replaces Lockwood as the car’s major sponsor.

The three-year deal was unveiled at the Melbourne headquarters of Mercedes-Benz Asia Pacific; the parent company of Freightliner.

Freightliner’s commitment coincides with the arrival into V8 Supercars of Penske, which is expected to promote its truck brands, Western Star and MAN, on Marcos Ambrose’s Falcon.

“There are strong parallels between the V8 Supercar audience and Freightliner Trucks,” said Daniel Whitehead, the managing director of Daimler Truck & Bus in Australia.

“Freightliner Trucks are as traditional as the much loved Aussie V8 sedan; big and powerful that cover huge distances with ease.

“To be aligned with a team as professional as Brad Jones Racing, which has also surpassed a 25 year milestone in motor racing, couldn’t come at a better time for our brand.”

Next year will mark Coulthard’s fourth season at BJR, who is currently sixth in the championship standings, mirroring his final position from last season.

Jason Bright will again drive the second BJR Commodore in 2015, extending his tenure with the team to six years.

Neither a sponsor or driver has meanwhile been confirmed for the team’s third entry, currently steered by Dale Wood. The livery was launched at MBA headquarters in Melbourne 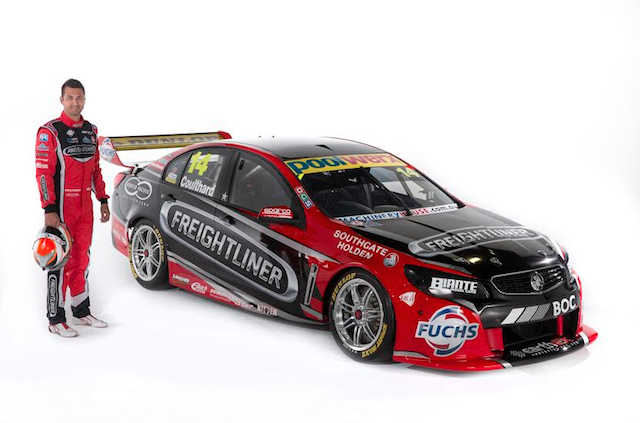 Freightliner is celebrating is 25th year in Australia in 2014