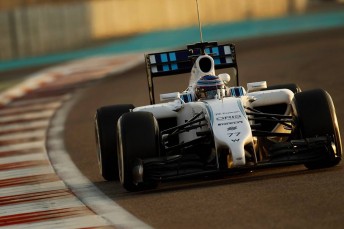 The Williams driver dominated the session initially topping the times following an early run on super soft tyres before going even quicker in the closing stages.

The Finn’s 1:43.396s effort proved to be almost half a second quicker than Ferrari’s Kimi Raikkonen, who was watched by new team-mate Sebastian Vettel in the squad’s garage.

However, it was McLaren who grabbed the headlines as a number of issues restricted reserve driver Stoffel Vandoorne to just three laps behind the wheel of the squad’s Honda powered development car.

Electrical issues prompted the team to sit out the morning running as engineers went through a serious of system checks.

Once the car appeared Vandoorne could only complete an installation lap before returning to the pits.

The Belgian returned to the track later in the afternoon only to cause a red flag when he stopped on track with two hours of running remaining. The McLaren came out for one final lap before pulling back into the garage.

Vandoorne attributed the limited running to a fuel data-logging issue while also confirming he had been unable to use the Honda engine at full power.

“We’d hoped to get a few more laps under our belts, but we had a fuel data-logging issue that stopped the car a couple of times,” said Vandoorne.

“However, the team is already analysing the situation and we’ll hopefully cure it ahead of tomorrow.

“Nevertheless, it’s been a very positive day for us. At this stage of development, any lap we complete has a benefit – and it’s better to be solving these initial teething problems in November rather than in Jerez next February.”

GP2 champion Jolyon Palmer was fourth fastest on his F1 debut with Force India despite being limited to 37 laps after an engine problem.

Red Bull Racing’s Carlos Sainz Jr recorded 100 laps for the Milton Keynes outfit in fifth ahead of the Caterham of Will Stevens in sixth.

Toro Rosso’s Max Verstappen ended the day in ninth position after suffering a crash in the morning hit out.

Daniel Ricciardo will jump behind the wheel for Red Bull for the final day of the test. He will be joined by countryman Spike Goddard, who will make his F1 debut with Force India.