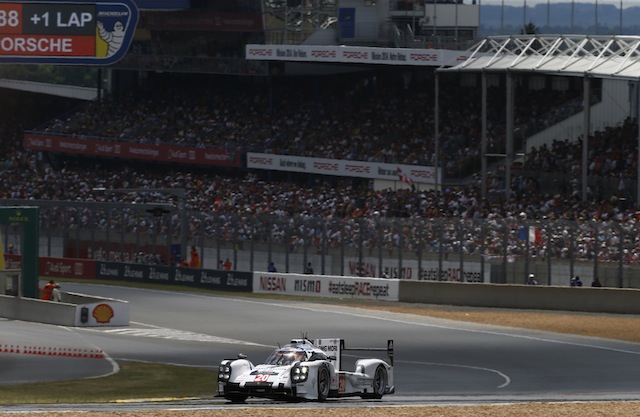 Porsche will step up its involvement back in the top bracket of sports car racing by adding a third LMP1 to its Le Mans plans from June 13-14 next year.

The third 919 Hybrid will debut in the Spa 6 Hour event as a full dress rehearsal for the twice around the clock classic on May 2.

Porsche has not disclosed a driver line-up for the entry or indeed who is likely to be in the frame for a seat.

While Porsche have yet to record a victory in its comeback season this year the #14 and #20 filled the minor podium places at the previous round in Bahrain behind Toyota’s TS040 V8-powered Hybrid.

“In 2014 we have been competitive immediately with the most complex and innovative race car Porsche has built so far,” Wolfgang Hatz, member of the Board, Research and Development, Porsche AG, said.

“To date we have achieved five podium places, three pole positions and two record laps, in Shanghai and Bahrain.

“The target is the highest performance with maximised efficiency in ever growing dimensions.

Porsche board chairman Matthias Muller said the decision to expand was testimony to the commitment the marque has to build on its record 16 outright victories at Le Mans and its place in the FIA World Endurance Championship.

“Our decision to compete with a Porsche works team in the WEC’s LMP1 category proved to be the right one.

“This is what we feel at every race. The highly demanding motorsport programme contributes directly to the development of future sports cars for the road.

“For the development and testing of future hybrid systems, you can’t ask for any harder test bench than the World Endurance Championship and especially the Le Mans 24-Hours.

“The same goes for the newly established Porsche LMP1 crew. More than 230 people had to grow together quickly to form a strong team.”

The Japanese giant intends to run two LMP1s in the World Endurance Championship but, like Porsche, will add a third for Le Mans.