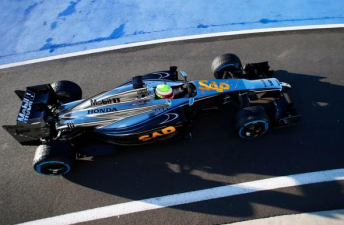 McLaren will deploy the first iteration of its Honda powered Formula 1 car at the two-day end of season test in Abu Dhabi.

The car dubbed the MP4-29H broke cover for the first time during a filming day shakedown at Silverstone two weeks ago when it completed 16 laps with test driver Oliver Turvey at the wheel.

The test, which begins today, will be the development car’s first proper outing allowing the Woking team to evaluate the performance of the new Honda V6 power unit it will use next season.

McLaren reserve driver Stoffel Vandoorne will jump behind the wheel for both days at the Yas Marina circuit.

The Australian will be joined by countryman Spike Goddard on track with the Sydney racer set to make his F1 debut with Force India. GP2 champion Jolyon Palmer will take the wheel of the VJM07 for the first day of action.

Williams will split the testing duties between Valtteri Bottas and Felipe Nasr despite the Brazilian agreeing to join Sauber for next season.

Marcus Ericsson is due to make his debut for Sauber having recently signed for the Swiss outfit. Will Stevens, who replaced Ericsson at Caterham will drive for the struggling Leafield squad.