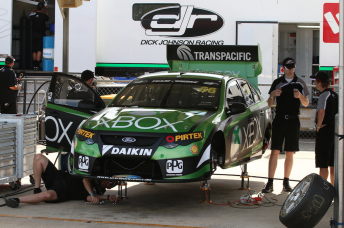 Dick Johnson Racing has elected to place its most experienced race engineer on Marcos Ambrose’s wildcard entry at the NRMA Sydney 500.

Mark Fenning, who has been engineering Scott Pye’s #16 DJR Falcon throughout the season to date, has been switched onto Ambrose’s #66 Falcon ahead of the event.

The Ambrose-Fenning combination is expected to continue into next season, when Ambrose races full-time under the new DJR Team Penske banner.

The pair underwent their first test day as a combination at Queensland Raceway on Sunday and will enjoy a second hit-out at the Ipswich venue on Thursday ahead of Sydney.

Apart from a single season at Paul Morris Motorsport in 2011, Fenning has been a DJR mainstay in recent years, working with Steven Johnson, Tim Blanchard and more recently Pye. 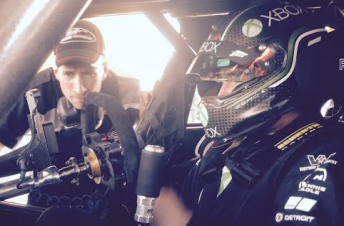 “Mark is our most experienced engineer here at DJR and we thought it best to pair him with Marcos for this event to help him become reacclimatised with V8 Supercars,” a DJR spokesman told Speedcafe.com.

“They both have a similar temperament and so far have been working together really well.”

Fenning is only the second V8 Supercar race engineer to be assigned to Ambrose, who worked with Paul Forgie during his entire five-year tenure at Stone Brothers Racing, which netted the 2003 and 2004 championships.

Ambrose’s Sydney wildcard will also utilise mechanics from Pye’s entry, which will in turn be bolstered by members of DJR’s workshop-based staff.

Pye will be engineered by the team’s technical director Nick Hughes, who takes on car duties as a one-off in order to accommodate the wildcard.