Alex Lynn’s continued his rise up the single seater ladder after securing the GP3 title at the season ending round at Abu Dhabi.

The Brit wrapped up the championship in qualifying after his nearest rival Dean Stoneman failed to secure pole position and the all important point required to keep the title battle alive.

Despite missing out on the championship, Stoneman went on to win the opening race of the weekend with a lights-to-flag victory.

Marvin Kirchhofer followed the Brit home in second with Dino Zamparelli completing the podium in third.

Nick Yelloly claimed victory in the final race of the season after Patric Neiderhauser was excluded from the results.

Race winner Neiderhauser was disqualified from the race after his Arden car’ rear wing breached the sporting regulations.

As a result, Lynn was promoted to second with Bernstorff ending his year on a high with a second podium from the weekend in third.

Kiwi Richie Stanaway ended the season seventh in the standings after finishing the two races in seventh and 12th respectively. 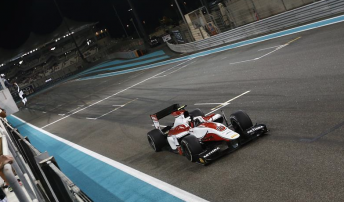 Vandoorne dominated the feature race to take the chequered flag by 12.1s from series champion Jolyon Palmer, while New Zealand’s Mitch Evans finished on the podium in third.

The victory saw Vandoorne climb ahead of second placed Felipe Nasr in the standings with the new Sauber F1 driver coming home in fourth.

Coletti made the most on strong start to win the weekend’s sprint race with the Monagasque driver slipping by polesitter Arthur Pic in the early stages.

The Racing Engineering driver went on to take the the victory by a comfortable 3.7s from Nasr and Pic. A sixth place finish for Vandoorne was enough for the Belgian to secure the runner up spot in the championship.

Evans ended the season fourth overall after finishing the final race of the year in fifth position.